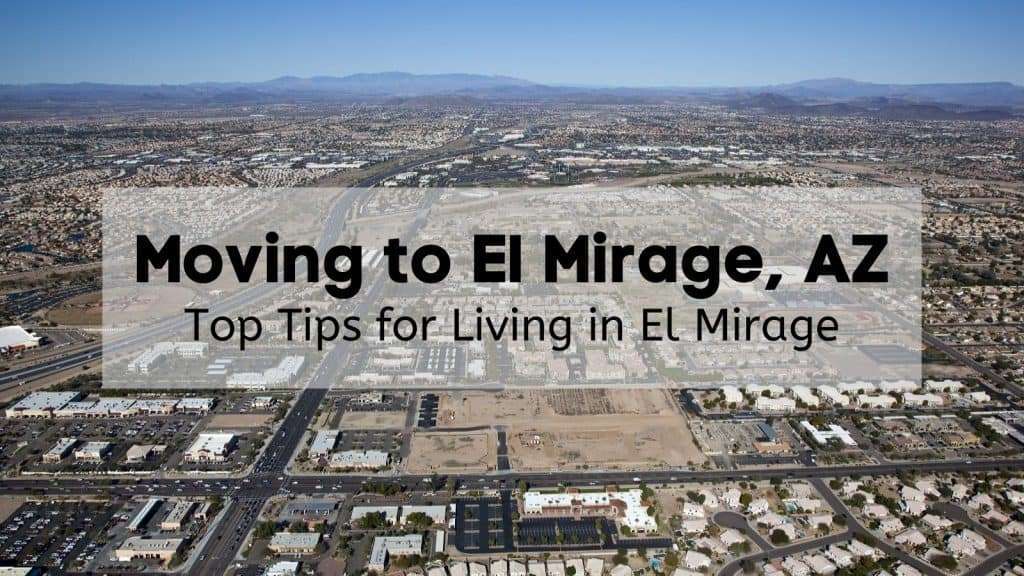 In just a few decades, El Mirage has grown from a small agricultural community to a thriving urban environment with family-friendly amenities and job opportunities. El Mirage, AZ is known as the gateway to the Northwest Valley and it’s one of the fastest growing suburbs of Phoenix. El Mirage boasts an excellent school district and large industrial park which makes it one of the region’s top employment centers. It’s also one of the best places to live for families who value safety, quiet neighborhoods, and beautiful parks. If you’re thinking about moving to El Mirage, Arizona, here’s everything you have to look forward to.

Where Is El Mirage Arizona?

El Mirage is in Maricopa County about 20 miles northwest of Phoenix. It’s on the Agua Fria River and US Route 60 and borders Glendale, Surprise, Youngstown, Sun City, and the Luke Air Force Base. El Mirage is in the West Valley region of metro Phoenix or more specifically, the Northwest Valley.

El Mirage has grown rapidly from a population of just 7,600 in 2000 with only 787 people/square mile. Within just 20 years, the population has grown by almost five times and the small city now has 3,600 people per square mile.

The median household income of the City of El Mirage is $59,975. That’s lower than the Phoenix metro median of $67,000 but closer to the Arizona median. The population is far younger than average for Phoenix and Arizona with just 15% of the population aged 60 or older. There are many younger families living in El Mirage with about one-third of the population 19 or younger.

The racial and ethnic composition is 48% Hispanic, 37% white non-Hispanic, 8% Black or African American, 2% Asian, and 3% two or more races.

Cost of Living in El Mirage

As a renter, you’ll find El Mirage apartments starting at $900 with average rent of $1,250 for a one-bedroom apartment. West Edge @ Thunderbird in the heart of downtown is one of the most popular apartment complexes with studios starting at $1,100. Each home includes a fenced yard for outdoor living space. The newest development is Village on Greenway Apartments, a gated apartment community with upscale amenities and close to the Westgate Entertainment District. Rent starts at $1,300.

Despite its small size, there are nearly 20 El Mirage neighborhoods, each with something unique to offer. You’ll find many HOA communities and neighborhoods without HOAs with home prices and amenities that vary significantly. Here are some of the best places to live in El Mirage depending on the lifestyle you’re looking for.

The residential Rancho Mirage neighborhood is a centrally located community across from the golf course. This gated community has a median home price of $495,000 with large, single-family homes built in the 2000s. You’ll enjoy upscale home features, spacious lots, and affordable HOA fees of about $40/month.

Parque Verde is a large neighborhood close to downtown and El Mirage Elementary School. Homes usually sell in the $300s and there is no HOA. Homes were mostly built in the 2000s with modest ranch style homes for sale.

Like many El Mirage communities, homes in Arizona Brisas were mostly built in the 2000s when the city’s population began booming. You’ll appreciate the more unique architecture in Arizona Brisas and affordable homes in the low to high $300s. The neighborhood surrounds Riverview Elementary School and it’s right on the river with quiet residential streets and two neighborhood parks.

During the winter, the average daytime high is 66 to 71°F. Summers are humid with temperatures frequently over 100°F from June through August. Monsoon season brings flash floods and dust storms.

Adjusting to the summer weather in El Mirage can be difficult if you aren’t from the region. Make sure you keep a filled water bottle with you when you leave the house and try to run the air conditioning at the highest temperature you can tolerate for the first couple of weeks to help you adjust. You’ll also want to get in the habit of wearing sunscreen every day.

Things to Do in El Mirage

Why do families love living in El Mirage, AZ? It isn’t just the great schools – the city also boasts many community-oriented and family-friendly attractions. Rent a plot to grow your own produce at the El Mirage Community Garden, participate in programs offered by the El Mirage Library branch of the Maricopa County Library District, and join the Northwest Valley Family YMCA for youth sports, camping, adult programs, fitness, and swimming.

There’s plenty of shopping in El Mirage with several strip malls like Coury’s Grand Plaza, the West Thunderbird Plaza, and Plaza El Mirage. Get groceries and essentials at the Walmart Supercenter, Food City Supermarket, Carniceria Sahuayo, and the Thunderbird and Dysart Goodwill,

Here are some of the top picks for what to do in El Mirage for couples and families.

Spending an afternoon at Gateway Park is one of the best things to do in El Mirage for families. This popular city park features playgrounds, sports fields, walking paths, a dog park, and a fun splash pad for younger kids.

Enjoy a fun weekend game of paintball or airsoft with friends! Fightertown sells and rents everything you need with a large inventory of equipment, paintball, and airsoft guns. They offer affordable rates with group discounts.

Pueblo El Mirage is often ranked one of the best golf courses in the Valley! It’s a championship 18-hole course suitable for all skill levels and there’s a restaurant on site.

You’ll find dozens of top-rated restaurants in El Mirage, especially authentic Mexican cuisine. The city has several chain restaurants but you’ll definitely appreciate the variety of family-owned restaurants, most of them in the downtown El Mirage area.

You’ll find many job opportunities after moving to El Mirage. The city’s economy is diverse with jobs in manufacturing, education, retail, government, and military. Copperwing Logistics Park in El Mirage is one of the largest business parks in the Southwest and a major employment center for the West Valley. It includes a foreign trade zone, 318,000 SQ FT Ti Cold storage facility, a large Avanti Windows & Doors manufacturing and distribution plant (operational by 2025), the new West US 3 Microsoft datacenter, and many other employers.

You can see Dysart school district boundaries here and find your neighborhood schools by address.

There are several community centers and learning centers nearby that offer career training for high school students and adults including West-MEC Northwest Campus in Surprise and the Dysart Community Center in El Mirage which serves low-income adults and youth. You’ll find higher education opportunities nearby at Ottawa University Surprise (OUAZ) and Grand Canyon University – West Phoenix with an accelerated BSN program.

Looking forward to enjoying El Mirage living first-hand? The friendly team of El Mirage movers at Mentors Moving & Storage are ready to get you settled into your new community without the stress and hard work. Give us a call today for a free moving estimate from our award-winning team!