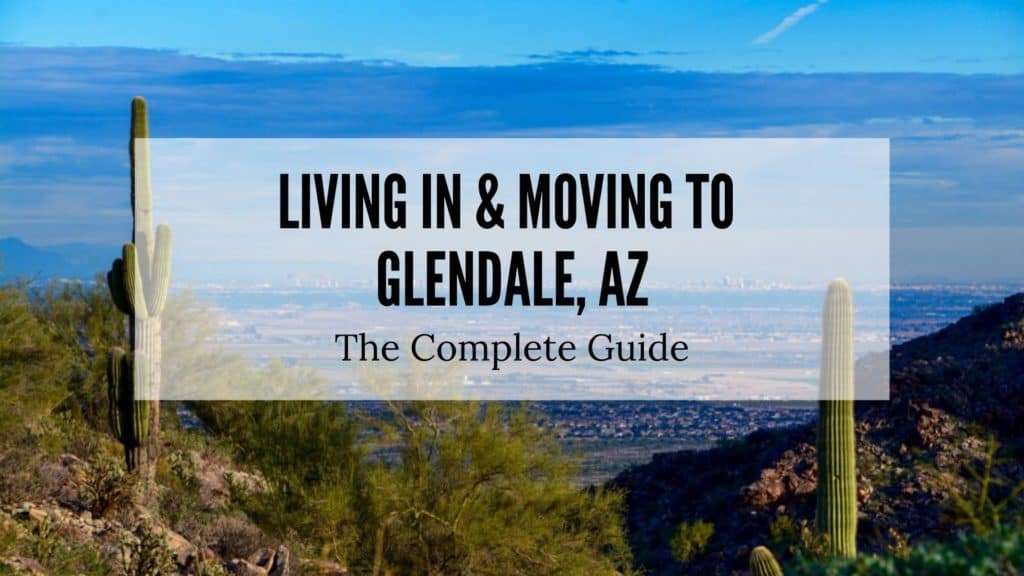 Prior to the late 1800s, Glendale was completely desert land. City-founder, William John Murphy, built the 40-mile-long Arizona Canal between Granite Reef and New River for the Arizona Canal Company, which brought water to the desert land. He named the city Glendale in 1887, which means valley of fertile, low-lying arable land, to increase the number of people moving to Glendale.

Glendale is known for being  Arizona’s antique capital, with Old Towne Glendale featuring antique shops in turn-of-the-century brick storefronts and Catlin Court’s Craftsman bungalows. There are about 70 antique shops within 10 blocks in the charming walkable district.

Where is Glendale Arizona?

Glendale, Arizona is in the “West Valley” region of the Phoenix area, and a city located in Maricopa County, about 9 miles northwest of downtown Phoenix. It’s about 10 miles from Glendale to Phoenix, taking about 22 minutes to drive.  Phoenix borders Glendale to the south and east, Peoria, El Mirage, and Surprise form the northwestern borders, and Goodyear and Litchfield Park border Glendale to the southwest.

Some of the largest areas of Glendale are Westgate and the University of Phoenix Stadium, areas that always seem to be alive with festivals, sporting events, or concerts.

Glendale is part of the Phoenix-Mesa-Chandler Metro area, although prior to 2015 it used to be known as Phoenix-Mesa-Glendale.

The population of Glendale is 249,630, making it one of the seven largest cities in Arizona and the fifth largest city in Maricopa County. Glendale experienced a population increase of 8.69% increase since 2010. There are 3,929.5 people living per square mile in Glendale. Among the residents are martial artists fighter, Sean O’Malley, and Michael McDowell, NASCAR driver.

About 9% of Glendale households do not have a car, compared to the national average of 8.7%. Glendale households average 1.72 cars per household, which is right about the average across the country as well. Interstate 101 runs right through the Glendale area, which makes it easy to get in and out of the city.

The major highways in Glendale include:

When you’re thinking about moving to Glendale one of the first considerations is how much it costs to live in the city. You don’t want to move to an area you can’t afford! Understanding what it costs to live in Glendale is possible by reviewing the cost of living index – a theoretical price index that helps you compare one city to another, measuring the differences in the price of goods and services. A cost of living index isn’t an exact measurement but it at least gives you an idea of what to expect for common expenses.

According to the Economic Policy Institute, a family of four living in Maricopa County would need to earn $89,542 per year to afford to live in the county. The MIT living wage calculator shows the hourly rate an individual must earn to support his or herself and their family, assuming the sole provider works full-time. The living wage for one adult and no children in Maricopa County is $18.08 per hour. If you have two children, you’ll want to earn $39.43. Check out the living wage calculator to see the hourly wage needed in relation to your family size.

Glendale property taxes are determined by local governments wherever the home is located and are adjusted based on the value of the property. You can determine your Maricopa County taxes by taking the assessed value of your property, dividing it by 100, and then multiplying it by the current tax rate. Glendale home prices are up 23.3% compared to last year, with homes selling for a median price of $450,000. Average monthly apartment rent in Glendale is $1,504.

The current property tax rate in Maricopa County is 0.610% of your assessed home value.

If you’re moving to Glendale and want to buy a house, you should know the market is competitive. The Glendale median home price is $450,000, and most homes get multiple offers. The average sale price per square foot is up over 23.7% from last year, selling for about $266 per square foot.

Here’s a list of Glendale, AZ homes for sale to get started with your search.

If you plan to rent an apartment instead of buy a home while living in Glendale, AZ, the average Glendale rent prices are $1,504 per month and price ranges for various apartment sizes according to RentCafe are:

Glendale Neighborhoods | Where to Live in Glendale

Deciding where to live in Glendale come down to how much you want to spend on housing or rent, whether you are looking for family amenities or an active nightlife, or how long you’re willing to travel to and from work. There are many options for neighborhoods that support a variety of lifestyles. Some of the best neighborhoods in Glendale are:

If you’re someone who loves the hustle and bustle of a city with endless opportunities for nightlife and fine-dining, the downtown Glendale area is the best neighborhood for you. There is plenty to explore, shopping venues, and a Broadway theater, botanical garden, and space center all within the neighborhood boundaries.

Located 16 miles west of central Phoenix, Litchfield Park is a suburban community with a casual lifestyle. If you’re looking for a safe community to raise your family, and a small town atmosphere – Litchfield Park is one of the best places to live in Glendale. Interstate 10 gives you easy access to the Phoenix metropolitan area.

A populated place within Glendale, the Arrowhead Ranch neighborhood was once a citrus farm. The area was purchased for development in 1978 and annexed by Glendale in 1979. The Arrowhead Ranch neighborhood is located between 75th Avenue and the Loop 101 freeway in the 85308 zip code of Glendale. There are over 1,200 houses in the community, along with the Arrowhead Country Club and Oasis Park, an aquatics center, and outdoor spaces.

Glendale, AZ has a Köppen classification of a mid-latitude steppe and desert climate. There is very little precipitation, only about 9 inches of rain per year, and the area is characterized by extremely variable temperatures. The warmest month of the year is July, with an average temperature of  90.0°F and the coolest month is January, when the average temperature drops to 51.0°F.

Due to the lack of precipitation and temperatures that rarely get colder than 36°F you probably won’t love living in Glendale if you’re someone who loves spending time in the snow. Glendale doesn’t get snow!

Restaurants in Glendale offer a wide range of worldly flavors, from traditional Polish or German meals to contemporary Chinese or Japanese, to home-style Mexican feasts. Many of the favorite places to eat are the restaurants near Arrowhead Mall (in the Arrowhead Towne Center).

Things to Do in Glendale, AZ

There is no shortage of fun things to do in Glendale, whether it’s taking the kids to a water park or zoo, enjoying a night out with friends at the local casino, or visiting one of the numerous parks for free things to entertain the family.

Map of Things to Do in Glendale, AZ

If you’ve been wondering where the next super bowl will be, you’re in luck because Super Bowl LVII on February 12, 2023, will be held at the State Farm Stadium in Glendale, Arizona.  The State Farm Stadium is home to the Arizona Cardinals of the National Football League and the annual Fiesta Bowl.

Glendale is also home to Gila River Arena – both are popular venues for sporting events.

Here’s how the Glendale crime rate compares to cities of a similar population size:

The Glendale Police Department has 410​​ officers on the force, dedicated to keeping the city as safe as possible.

Glendale is the growth leader in Arizona, with unprecedented job creation and commercial development growth. Over 21,000 new residents moved to Glendale since 2010, with 64% of the growth occurring since 2015. The population has a higher than average percentage of working-aged individuals between the ages of 18 and 24. There are approximately .40 jobs per resident, making Glendale the leader of all West Valley cities and fifth in the county with more jobs per citizen than Gilbert and Mesa, Arizona.

The largest employers in Glendale include:

Want to work in the same city you live in? Try finding city of Glendale jobs. The median hourly wage for people working in any industry in the Glendale area is $21.91 while the average weekly wage for people living in Maricopa County is $1,344.

You have many options when it comes to healthcare in Glendale. From urgent care centers to primary care physicians, and several hospitals – you are never far away from caring medical professionals. The top hospitals in Glendale:

Abrazo Arrowhead Hospital is a general medical and surgical facility that’s highly rated in the following treatments and procedures:

For the youngest learners in Glendale, Tots Unlimited offers two locations of preschool and childcare. Many of the elementary schools offer free all-day kindergarten, too.

For older children, the Glendale area is served by the following school districts:

Glendale is an “A” rated district with 8 of the 9 schools ranked among hte best high schools in the country by US News & World Report. All Glendale Union High Schools are part of the College Board’s 2013 National Advanced Placement District of the Year.

Everyone in the community benefits from the programming and resources available at the Glendale Public Library. Visit the library to find out how to become a volunteer at the next Super Bowl!

One of the first things you’ll need to do after moving to Glendale is set up the utilities in your new home and change your address on your driver’s license.

Visit this link to start or transfer your gas service.

If you already have an Arizona driver’s license and just need to change your address, Arizona law requires that you report the address change to MVD within 10 days of moving. You can change your address online at AZMVDNow.gov or contact us.

If you’re moving to Arizona from another state, you’ll need to visit one of the 40 ADOT offices to obtain your initial driver’s license and register your vehicles if you have any. You may be required to pass a vision test.

If you have a valid driver’s license from another state, you may not be required to take the written and road tests to get an Arizona license. If this is your first license, or you want to prepare, click here for Tests and Manuals.

When you’re ready to move to Glendale, Arizona, we invite you to give our experienced Glendale movers team a call at Mentors Moving: 480-619-8240. We look forward to helping you with your journey and know you will enjoy living in the beautiful city of Glendale!