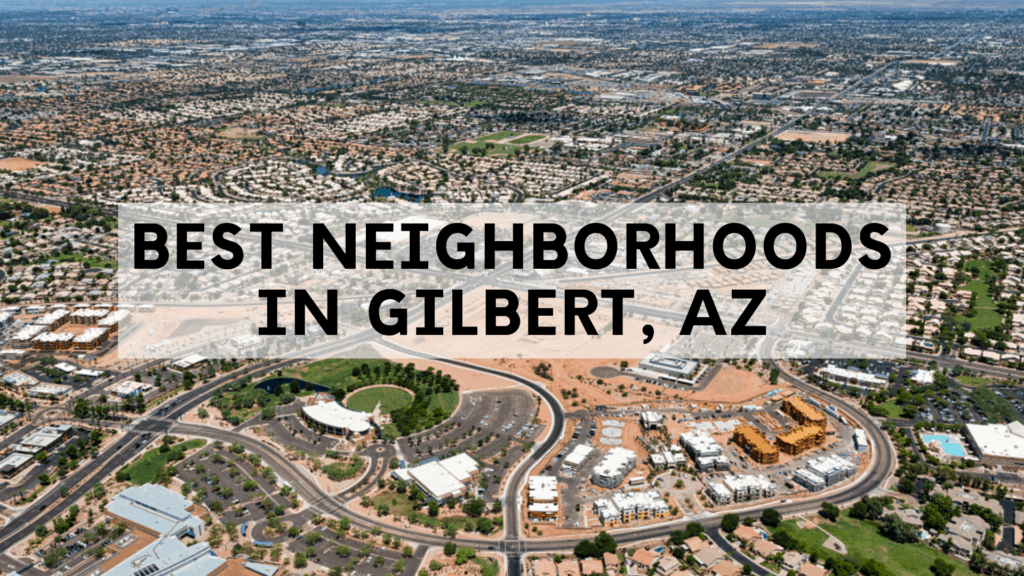 With its safe communities, family-friendly activities, and strong school systems, Gilbert, AZ has quickly become one of the most popular cities in the Phoenix Valley. It has been one of the fastest-growing areas in the state for many years now and continues to develop new amenities that attract people from all over.

As you’re looking through neighborhoods in Gilbert, you’ll see there aren’t any bad options around town. Let’s take a look at some of the best Gilbert neighborhoods where you can begin your search.

With beautiful single-family homes integrated throughout a network of four beautiful man-made lakes, this suburb is often referred to as a 900-acre “water-wonderland”. Val Vista Lakes offers comfortable living and a clubhouse that features tennis courts, fitness facilities, swimming pools, waterfalls, a tropical lagoon, and even a sandy beach. 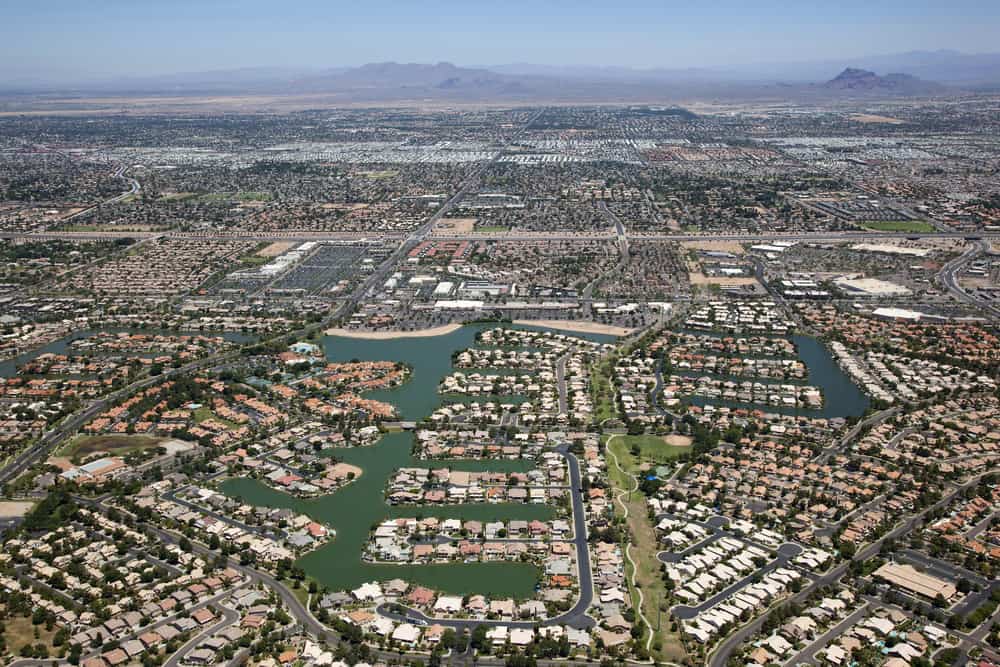 People living in Val Vista Lakes with children have the option of great schools like Challenger Basic School and the Gilbert Classical Academy, which is ranked among the top 10 high schools in Arizona. This Gilbert neighborhood is also right down the street from Village Square at Dana Park, where you’ll find great places like AJ’s Fine Foods, Barnes & Noble, Costa Vida, Cafe Zupas, Chipotle, and more.

Locals of Val Vista Lakes also have a short route to the beautiful Riparian Preserve at Water Ranch, which is one of the most popular landmarks in all of Gilbert.

2. Power Ranch – One of the Largest Neighborhoods in Gilbert

With almost twice as many residents as any other neighborhoods in Gilbert, the Power Ranch community boasts over 3,300 households that span more than 2,000 acres of land. The area has two community clubhouses, each with its own park, as well as fishing lakes, basketball courts, sand volleyball, swimming pools, playgrounds, and much more.

Both young children and teens have strong school options with education campuses at places like Power Ranch Elementary, Bridges Elementary, and Higley High School. And right across the street from this Gilbert neighborhood is Power Marketplace with an LA Fitness, Home Depot, Taco Bell, Burger King, Cold Stone Creamery, and more.

3. Seville – Among the Most Affluent Gilbert Neighborhoods

Home to the Seville Golf & Country Club, this wealthy community is a gorgeous area near the southern border of town. As one of the best neighborhoods in Gilbert, members of this area enjoy the club’s golf course, tennis courts, swimming pools, fitness center, and an amazing restaurant called The Grove.

Local amenities nearby include Fry’s, Walgreens, Papa John’s, Moreno’s Mexican Grill, and BoSa Donuts. This is also one of the closest Gilbert neighborhoods to the spectacular San Tan Mountain Regional Park about 12 miles away.

4. Ashland Ranch – One of the Safest Gilbert Suburbs

While Gilbert is frequently ranked among the safest cities in Arizona, Ashland Ranch takes it a step further as one of the safest local communities. And as another one of the most wealthy neighborhoods in Gilbert, it’s truly a great option for people thinking about living in this city.

5. The Islands – Waterfront Property in Arizona

Sporting hundreds of towering palm trees and three large lakes, The Islands make you feel like you’re living on a coastal resort. Members of this great Gilbert suburb enjoy catch and release fishing, boating, children’s playgrounds, local clubs, and community events happening all year round. The local Neely Traditional Academy is one of the most highly ranked schools in the city. 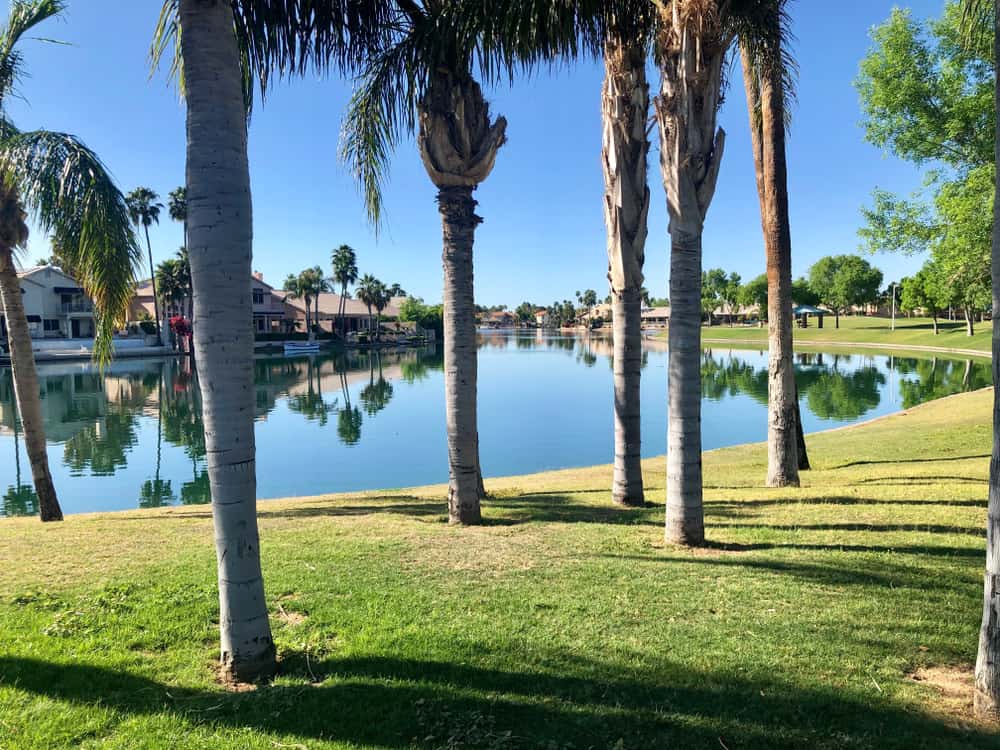 Just down the road, residents can visit the weekly Gilbert Farmers Market as well as some of the most popular restaurants around the city in Old Town Gilbert such as Dierks Bentley’s Whiskey Row, Liberty Market, Zinburger, Postino, and Joe’s Real BBQ.

Many people living in Finley Farms enjoy being close to the Eastern Canal Trail, which is one of the most popular paths for bikers, runners, or simply for those who want to take a leisurely stroll. The top-rated Greenfield Elementary and Finley Farms Elementary are both located within the borders of this Gilbert neighborhood as well.

Almost half the population of people living in Coronado Ranch are children under the age of 18 years old. This comfortable, family-friendly community is one of the best neighborhoods in Gilbert for people who have kids. It has multiple parks like Shuhandler Park and greenbelts scattered across the community, many of them with basketball courts, playgrounds, and open space to run and play.

Connected along the west side of Power Ranch, members of this community have access to the growing Higley Pavilion as well as the Higley Village Shops & Professional Plaza which includes Lowe’s, Goodwill, Desert Fitness, Lil’ Einsteins Preschool, Barro’s Pizza, Dairy Queen, and The Nook Eatery.

Coronado Elementary and Perry High School are the two main education choices for young students in this Gilbert neighborhood.

8. Lyon’s Gate – Near the Local University and Airport

One of the most conveniently-placed Gilbert neighborhoods is the popular community of Lyon’s Gate. It is a short distance from both the Arizona State University Polytechnic Campus and the rapidly expanding Phoenix-Mesa Gateway Airport, both of which are less than 4 miles away.

Lyon’s Gate is right across the street from Williams Field High School and is also close to American Leadership Academy, a large K-12 campus. Fun activities nearby can be found at the local Topgolf or Main Event Gilbert, with one of the best places to eat in Gilbert down the road at Joe’s Farm Grill.

Which of These Gilbert Neighborhoods is Right for You?

As one of the safest cities in Arizona, you simply can’t go wrong when choosing from these neighborhoods in Gilbert. They all provide local residents with great amenities and plenty of fun things to do.

Looking for help with relocating to Gilbert? Call Mentors Moving & Storage today at (661) 325-6683 or complete the Request a Quote form above to get a free Gilbert moving estimate!