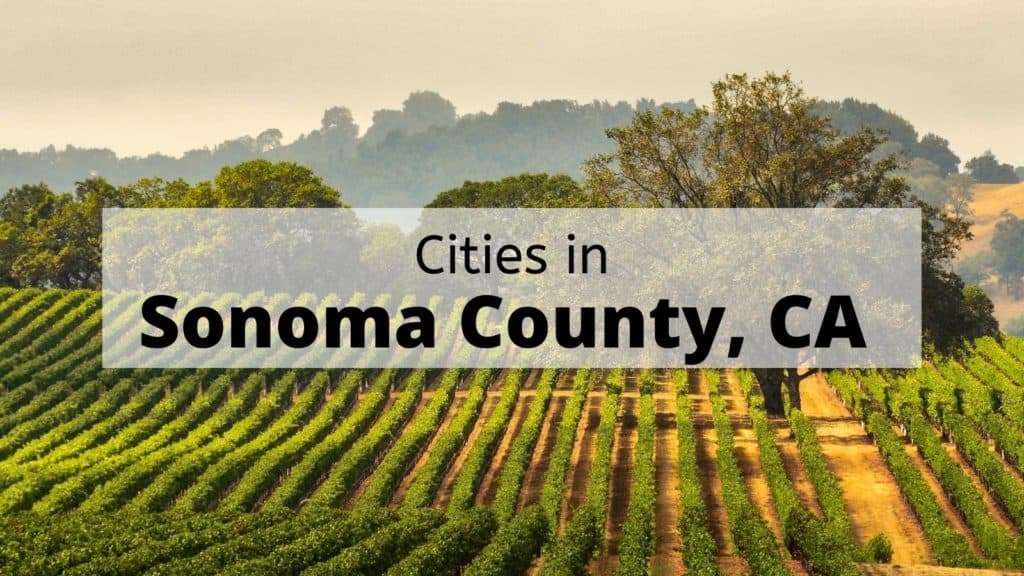 Hoping to set up camp along the beautiful Northern California coast? Look no further than Sonoma County, California– home to beautiful weather, natural beauty, and friendly environments. Whether you’re looking for an upbeat and lively community or a laid-back and hush life in the Sonoma Valley countryside,– all wonderful cities in Sonoma County have something incredible to offer.

Any relocation is a major undertaking that requires a lot of time, research, and decision-making before even taking action. With 482 cities, towns, and villages, as well as 1,043 census-designated places (CDPs), there’s a wide range of options to choose from when moving to or within California. CDPs however, are indeed areas with a concentration of population but are not identified as cities or towns which is why we won’t cover them. Nonetheless, we’ve put together this article that utilizes trusted, US Census-approved information to help you narrow down key facts and demographics of Sonoma County and the incredible cities of which it is composed.

The County of Sonoma

The history of Sonoma County is traced all the way back to pre-European settlements when the land was inhabited by Kashaya, Miwok, and Poma Indians thousands of years before Christ. Fast forward to 1935, Sonoma County was ranked as the top 10th most agriculturally productive county in the nation and is currently ranked as 22nd.

Nowadays, Sonoma County flourishes with dairy farms and cattle grazing that contributes to the breathtaking attractiveness of the countryside. In fact, the county of Sonoma is recognized for its incredible organic produce and sustainable farming. Despite the population having doubled in the last 40 years, the county continues to preserve its rich heritage and agricultural, small-town charm while still supporting the livelihood and new development for the expanding population.

There are 9 cities in Sonoma County in addition to 28 census-designated places. Among the cities in the county, Santa Rosa is the largest and most populated. The county of Sonoma is home to a diverse culture, exciting events, and an array of breathtaking natural beauty composed of forests, mountains, meadows, valleys, rivers, and 55 miles along the Pacific Ocean coastline. Considering this, it’s no surprise that Sonoma county was ranked by U.S. News and World Report as one of the top 100 places to live in the nation.

If anyone knows anything about Sonoma County, they should know that it stands as the birthplace and largest producer of California’s wine industry. Sonoma County is famous for its spectacular wines and renowned vineyards that many wine critics believe to produce the best Pinot Noirs in the nation.

Like a good glass of wine? As the most populated and largest city in Sonoma County, Santa Rosa is the principal city in California’s remarkable Wine Country. Santa Rosa’s warm weather, rolling hills, great schools, and close proximity to the coast and San Francisco all contribute to why it is ranked 6th best place to live in California by U.S. News & World Report.

As well as providing some of the nation’s top wineries and vineyards right in your backyard, Santa Rosa is home to plenty of parks, farms, nature, and incredible 400-acre wildlife preserve known as Safari West. The family-friendly city of Santa Rosa was also the hometown of the famous American Jazz singer, Julie London.

In the early 20th century, the city of Petaluma was recognized as the “Egg Basket of the World” due to its incredibly active egg industry. More recently, this foodie haven city in Sonoma County is known to have some of the top and most diverse restaurants in Northern California. Some of which include the delicious Italian restaurant Cucina Paradiso, and the Wild Goat Bistro.

On top of an endless selection of eats, Petaluma is known to be a beautiful, safe, and excellent place to live in and raise a family. For those looking to cool off in Bodega Bay, the city sits just 20 miles from Dillon Beach which is about a 20-minute drive west.

This beautiful, safe, and third-largest city in Sonoma County is home to a dynamic arts community and the well-acclaimed Sonoma State University of 9,300 students. The city was once a horticulturally-successful ranch and was named after the former owners– the Rohnert family. Rohnert Park gives off a satisfying mix of both urban and suburban atmospheres in which plenty of schools and things to do are within arm’s reach.

Along with access to Rohnert Park’s highly-rated Graton Resort and Casino, the city of Rohnert Park offers residents a peaceful and reliable place to live filled with countless recreational opportunities and an eclectic choice of restaurants.

According to the FBI, Windsor is the safest city in Sonoma County with a crime rate of 1,126 per 100,000 residents which gives you a 1 in 89 chance of being a victim. Considering this, the crime rates in Windsor are low in comparison to the other cities in the county. Windsor is also the wealthiest city in Sonoma County with a median household income of $106,889. Situated near the Russian River, the town of Windsor was named back in 1855 by Hiram Lewis, a man who said the land remained him of the landscapes surrounding Windsor Castle in England.

As one of the safest communities in California, Windsor is known for its family-friendly atmosphere, the array of amazing wineries, and the Windsor Town Green– an area featuring free events throughout the year. And who doesn’t love to take advantage to free fun stuff? Some events include concerts, movies nights, specialty festivals, and even a farmers market!

This beautifully historic city in Sonoma County is surrounded by vineyards and rolling hills making up the picturesque wine country town. Aside from award-winning wineries, Healdsburg is equipped with diverse boutiques, fancy restaurants, biking trails among the Alexander and Dry Creek Valleys, and luxury hotels like Hotel Healdsburg.

What is ranked by US News Travel as #10 in “25 Best Small Towns to Visit in the USA”, Sonoma remains a historic city in the heart of the renowned winemaking region of Sonoma Valley. This lovely city in Sonoma County is known for its colonial-era Sonoma Plaza, fabulous art galleries, and the popular Sonoma’s Tuesday Night market that is held in the picturesque city center.

The city’s name seemingly derives from the native people who referred to it as the “valley of the moon” whereas the moon appears to rise and set numerous times from specific sacred spots behind the Mayacama Range peaks.

If you’re looking for the perfect place to raise a family, and have close proximity to the large cities and breathtakingly exquisite state parks, the tranquil city of Cloverdale is the place to call home. As the northernmost city of Sonoma County, Cloverdale is situated in the scenic Alexander Valley wine region.

For those seeking to stay active, Cloverdale is packed with trails and parks to utilize all throughout the year. The city boasts a dense downtown that offers highly-rated eateries and wineries, a family-friendly environment, and a flourishing arts community illustrated at places like the Cloverdale Performing Arts Center.

This apple-famous city in Sonoma County is known for being the home of Gravenstein apples which were planted by Russian explorers in 1811. In addition to that, the small and charming wine country city of Sebastopol possesses a laid-back, hippie atmosphere and is now arguably West Sonoma County’s best arts and creative center.

Aside from its fruity fame and free spirit, Sebastapol maintains A-rated schools, excellent weather, great commute times, and a plethora of outdoor amenities that families and people of all ages can enjoy!

Located in the heart of Sonoma County lives the vibrant city of Cotati. As another city apart of the Wine Country, Cotati is situated in the Sonoma Coasts AVA and is recognized as one of the top places to visit in the county due to the fun shops, excellent schools, and outdoor recreational amenities.

Smack in the middle of Cotati is California’s historic landmark, La Plaza Park. This eventful park is known to host great music, delicious food, and festivals that draw in accordion aficionados from across the globe. For the active night owls, you’ll enjoy the city’s nightlife and tasty restaurants that are easy to commute to on foot.

Where is Sonoma County?

Sonoma County is situated about 45 minutes north of San Francisco on the North Coast of California within the San Francisco Bay Area.

How many cities are there in Sonoma County?

There are 9 cities in the county of Sonoma– along with 28 census-designated places.

What is the most populous city in Sonoma County?

Santa Rosa is the most populated city in Sonoma County with a population of 178,127 people.

What is the wealthiest city in Sonoma County?

With a median household income of $106,889, Windsor is the wealthiest city in Sonoma County.

Which city in Sonoma County has the largest land size?

With a land area of 42.7 miles squared, Santa Rosa is the largest city in Sonoma County.

Which of Sonoma County’s Cities is Right for You?

Our highly-trained and trusted team at Mentors Moving is here to give you a stress-free, easy transfer. If you’re thinking about moving to Sonoma County CA and you’re ready to get started, reach out to our top-rated relocation company to let your new life in Sonoma County begin!