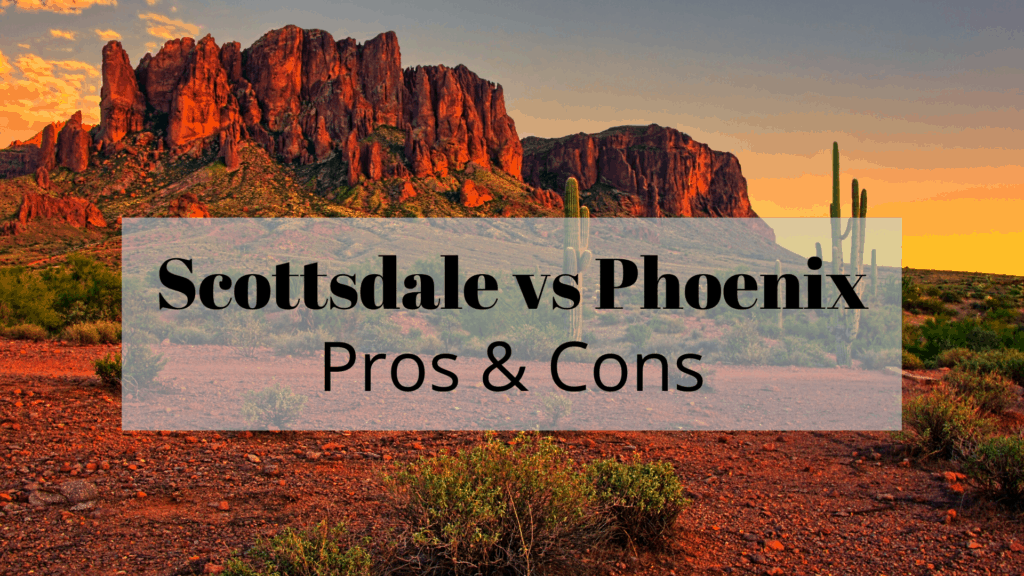 Planning a move to Arizona but struggling to choose the right city? Phoenix and Scottsdale are two of the biggest and fastest-growing cities in the Grand Canyon State with a lot to offer residents, including breath-taking desert views, exciting cultural attractions, and a strong economy. To help you decide where you should live, we’ve put together a comprehensive comparison of Scottsdale versus Phoenix covering the cost of living, attractions, commute times, and more.

Pros & Cons of Living in Scottsdale vs. Phoenix

Trying to decide whether you want to live in Scottsdale or Phoenix? This list of Scottsdale vs. Phoenix pros and cons covers some of the biggest reasons to choose one city over the other.

Scottsdale’s Great Schools are an Advantage

Moving with a family or planning to have children in the future? When you compare Scottsdale vs. Phoenix schools, Scottsdale definitely comes out ahead. 95% of students in Scottsdale graduate high school compared to 77% in Phoenix — that’s 15% higher than the Arizona and U.S. average! Scottsdale also has a highly educated population with over 55% of the population holding at least a bachelor’s degree compared to 27% in Phoenix.

Scottsdale has some of the best public schools in Arizona like BASIS Scottsdale Primary – East Campus, ranked the 4th best public elementary school in the state. Most schools in the Scottsdale Unified School District are A-rated — one of many pros of living in Scottsdale compared to Phoenix.

There are more than 25,000 businesses in the city and almost 20% of Arizona corporations are headquartered here. While software is big in Scottsdale with over 90% of software companies reporting at least 10% employment growth, other major industries include real estate, healthcare, insurance, finance, tech, and social services.

Phoenix also ranks well for job growth but it has a median household income of just $49,000 compared to $76,500 in Scottsdale — a point to consider when you compare Scottsdale versus Phoenix. 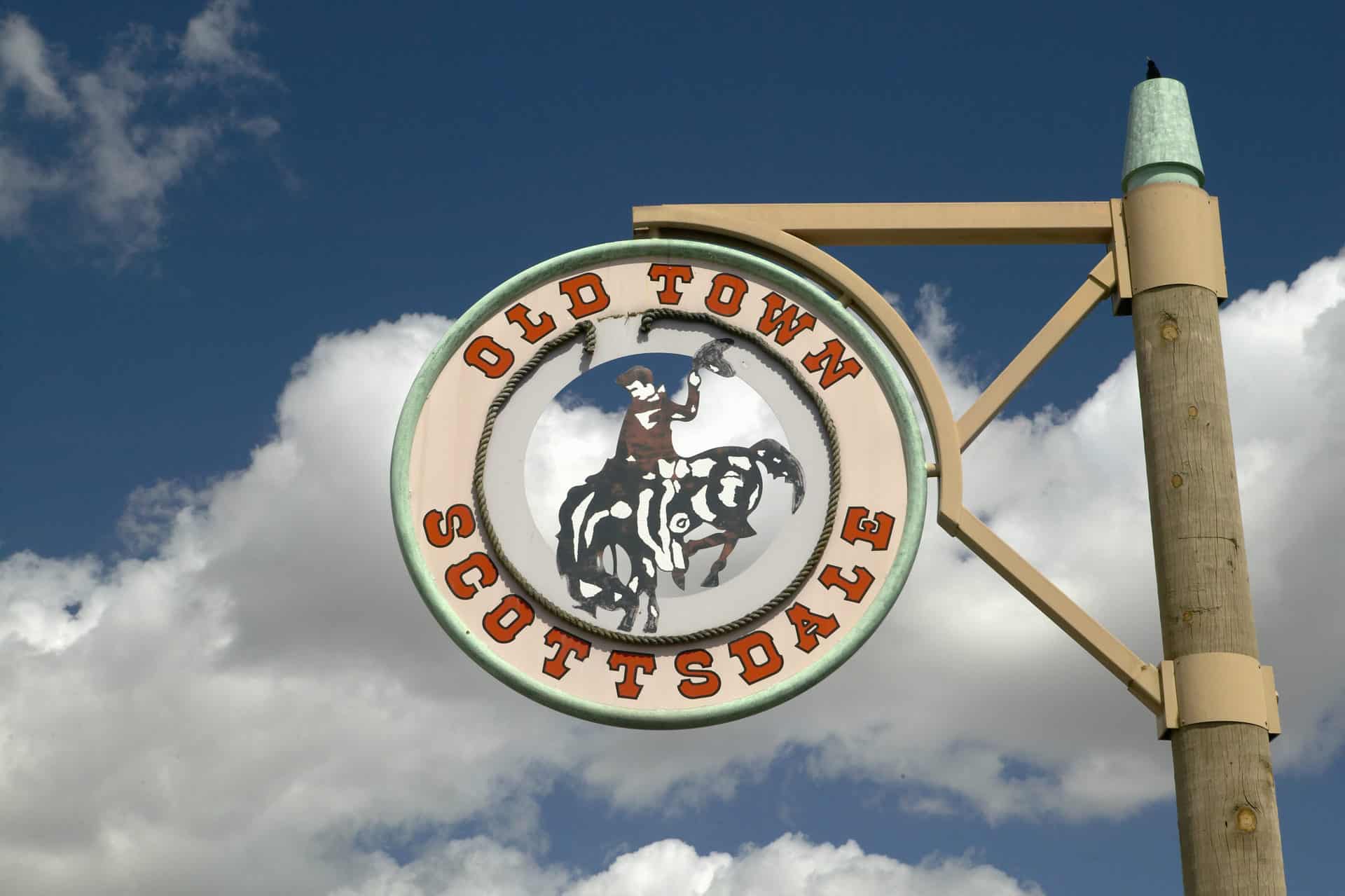 You won’t be bored living in Scottsdale with plenty of hip bars, lounges, and clubs catering to residents in their 20s and 30s (and those youthful at heart!). The Entertainment District in Old Town Scottsdale is packed with everything from day clubs with pools and country bars to exciting nightclubs with DJs.

Old Town Scottsdale has tons of tropical-themed destinations and fun clubs like Maya Day + Nightclub which has Vegas-style pool parties during the day and becomes a nightclub during the night with DJs and heart-pounding music. Want a more laid-back experience with friends? The Entertainment District boasts a boutique bowling alley, traditional pubs, cocktail lounges, and even karaoke lounges to explore.

High Housing Costs in Scottsdale Are a Drawback

The main drawback to Scottsdale versus Phoenix? High housing costs. Scottsdale is one of the most expensive areas to live in Metro Phoenix with median rent and home values that far exceed the metro average. The median home value in Scottsdale is $433,500 — far above the national average of $226,000 — while median rent is almost $1,600.

If you’re looking for affordable housing in Scottsdale, keep in mind that the median home value can be deceiving. South Scottsdale is the most affordable area of the city. North Scottsdale and Central Scottsdale have a high share of luxury homes.

Outdoor Recreation in Phoenix is a Big Plus

If you can withstand the heat, Phoenix is great for outdoor enthusiasts! The city has more than 180 parks and tens of thousands of acres of desert preserves with more than 200 miles of desert trails to explore.

Check out music festivals and big acts at the outdoor Ak-Chin Pavilion or spend a day tubing on the Lower Salt River rapids in the Tonto National Forest. Explore South Mountain Park and Preserve, the country’s largest municipally maintained park, with scenic views from Dobbins Lookout.

When you compare Scottsdale vs. Phoenix, you’ll find more opportunities to enjoy sports of all varieties in the big city. Phoenix has more than 200 golf courses and it’s home to the Waste Management Phoenix Open. It’s one of just a few cities with a pro sports team in all major sports such as the Arizona Coyotes (NHL), Arizona Cardinals (NFL), Phoenix Suns (NBA), and Arizona Diamondbacks (MLB). You can even catch NASCAR events in Phoenix! 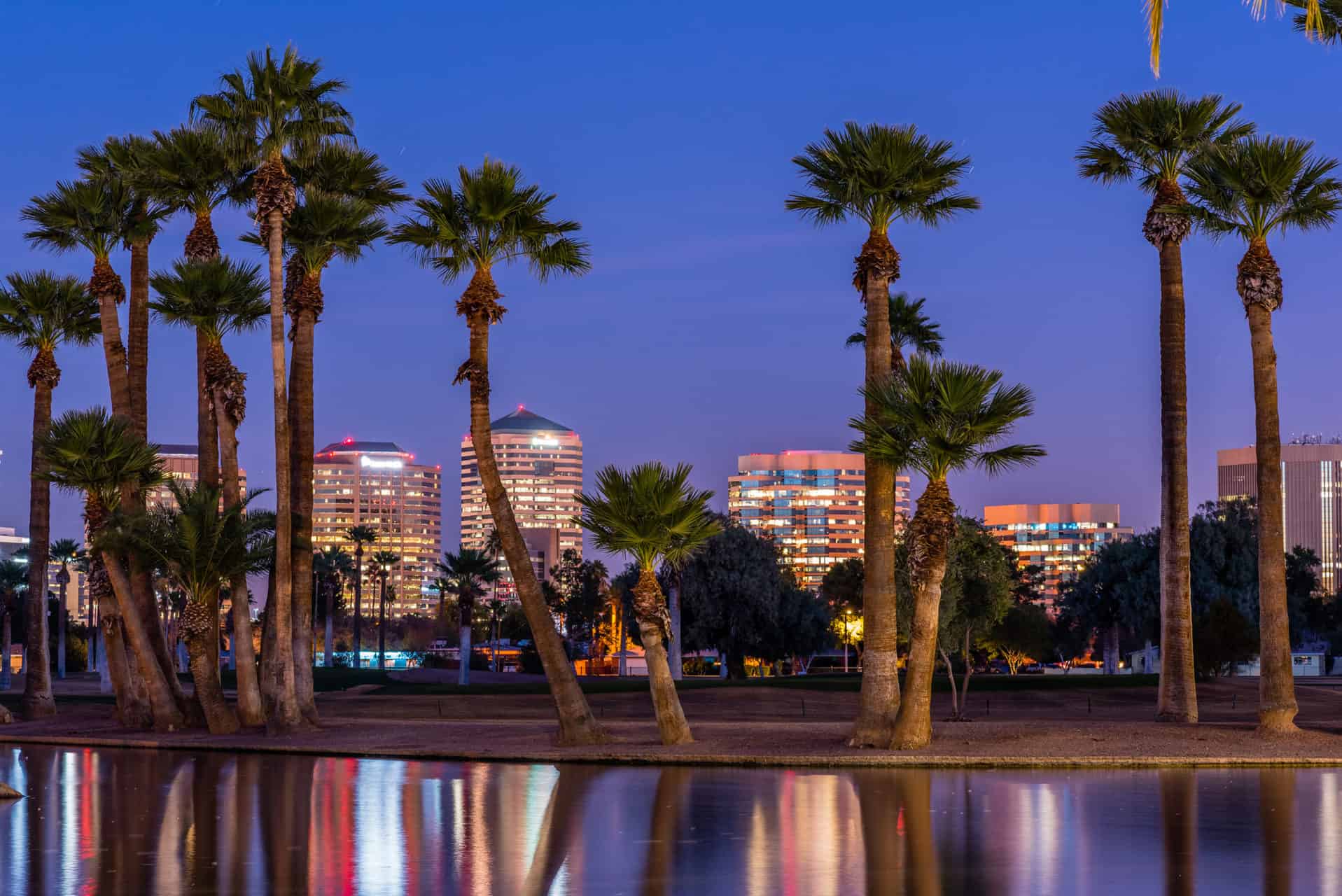 Tons of Great Neighborhoods in Phoenix

One of the advantages of living in Phoenix is you have tons of great neighborhoods to choose from. Phoenix really has something for everyone. Greater Coronado is a historic community with ranch, bungalow, and Spanish Colonial style homes with lots of charm. Roosevelt Row — or RoRo — is one of the most pedestrian-friendly neighborhoods in the city with a historic arts district, boutiques, and coffee shops. Arcadia is close to the shopping and nightlife of Scottsdale with the most greenery in Phoenix and beautiful views of Camelback Mountain.

You’ll Rely on a Car in Phoenix

Do you have dreams of living in a city where you can walk to work, shopping, or your local park? Phoenix has a very low walkability score and it’s a very car-dependent city. This is one of the downsides of living in Phoenix that you’ll want to consider. Only 8% of Phoenix residents are car-less as the public transportation system simply isn’t strong enough to replace owning a car.

In Phoenix, you’ll need a car for even simple errands. Even when the public transit system can work well for your commute, you probably won’t enjoy waiting for a bus for 15 to 30 minutes in temperatures topping 110 degrees in the summer.

Phoenix lacks a lot of the excitement you’d expect for a city of its size. Downtown Phoenix is largely dedicated to business with little nightlife or entertainment options. In fact, you need to head to the suburbs like Scottsdale to find an exciting nightlife — a unique quirk and a potential drawback of living in Phoenix. The city also has a noticeable lack of cultural attractions and cuisine. If you’re looking for excitement and entertainment, you may be better off in one of the Phoenix suburbs like Scottsdale.

Cost of Living in Scottsdale vs. Phoenix

According to Numbeo, you need $4,238 in Scottsdale to maintain the same standard of living you get with $4,100 in Phoenix as a renter. Here’s how it breaks down:

Housing costs play a big role in the cost of living in Phoenix versus Scottsdale. That’s the one area where Scottsdale is more expensive. Average rent in Phoenix is $1,170 compared to $1,530 in Scottsdale. 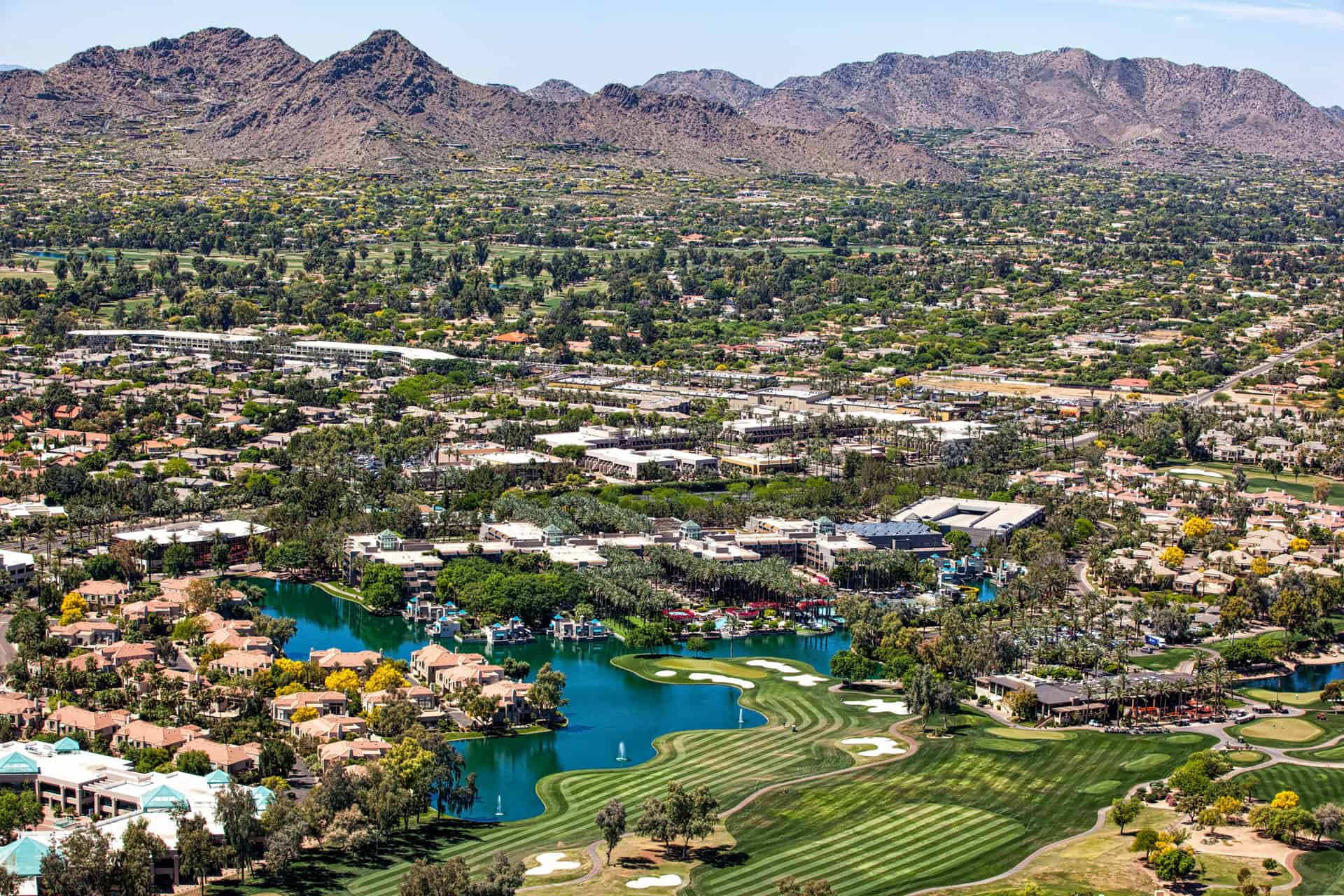 Additional Things to Consider Between Scottsdale vs. Phoenix

When you compare the population of Scottsdale vs. Phoenix, you’ll quickly see just how different these cities are in terms of size. The population of Phoenix is 1.66 million compared to 239,000 in Scottsdale. Scottsdale’s population has nothing on Phoenix, but Scottsdale is still a larger city and the 4rd largest city within Greater Phoenix.

To decide whether you should live in Scottsdale or Phoenix, consider the type of lifestyle you want. If you want more space and a quieter lifestyle without sacrificing nearby amenities, Scottsdale may be a good fit. If you prefer to be in the center of the action or closer to a job in the city, Phoenix may be right for you.

Crime Rate in Scottsdale vs. Phoenix

Commuting in Scottsdale Versus Phoenix

No one wants to spend time suffering through a long commute every day. It isn’t just wasted time; studies show that the daily stress of a long commute damages your physical and mental health. It’s a good idea to compare average commutes in Scottsdale vs. Phoenix before you decide where to live.

Metro Phoenix, surprisingly, has among the best commute times in the U.S. In the state of Arizona, both Phoenix and Scottsdale make the top 6 for shortest commutes — but they differ enough. The average commute in Phoenix is 26.1 minutes compared to 22.9 minutes for Scottsdale. If you can avoid the traffic of commuting to the city for work and live in Scottsdale, your commute can be even shorter.

Scottsdale Versus Phoenix: Which Is Right for You?

While the choice between Phoenix and Scottsdale can be challenging, these two Arizona cities are close and residents can enjoy the amenities both have to offer. Scottsdale comes with higher housing costs but a more exciting nightlife jobs while Phoenix offers a lower cost of living and amazing neighborhoods. When you compare Scottsdale vs. Phoenix, where do you see yourself moving?

Whether you’re moving to Phoenix or Scottsdale, you can count on the affordable movers at Mentors Moving to get you there with dependable and tailored moving services to fit your needs!