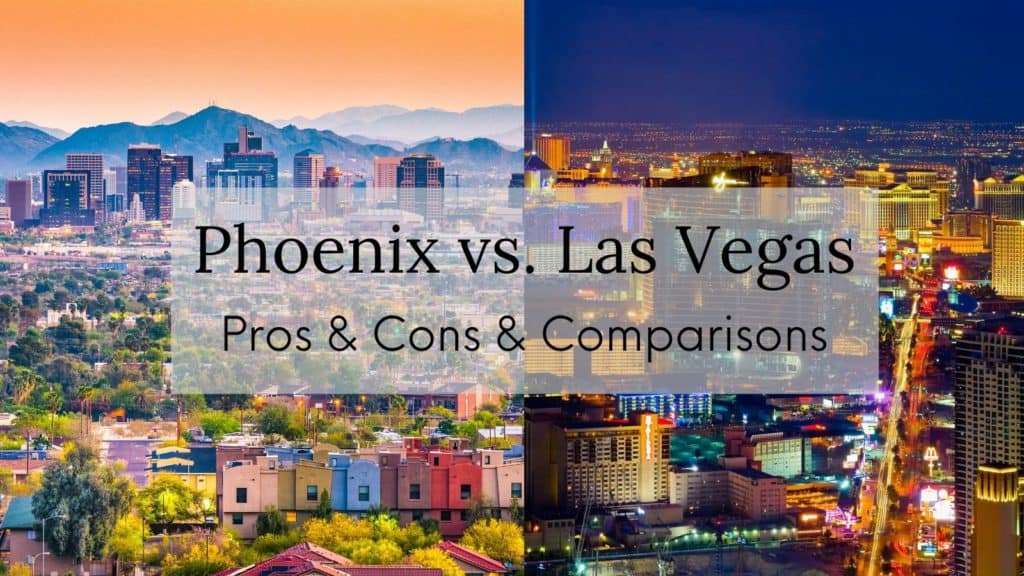 Is desert living calling to you? Las Vegas and Phoenix are two of the biggest and most vibrant cities in the West, both with amazing cultural attractions, live events, and warm, dry climates. They’re both also fairly affordable for the West but they differ in many ways.

To help you decide which city to call your own, let’s compare and contrast Phoenix vs. Las Vegas in key areas to help you make an informed decision.

Pros & Cons of Living in Phoenix vs. Las Vegas

The best way to decide which city should be your new home is by comparing the Las Vegas versus Phoenix pros and cons. While Phoenix has urban sprawl and traffic, it’s home to excellent job and housing markets. Vegas, meanwhile, offers never-ending excitement and world-class cuisine.

Phoenix Has a Great Job Market

A great benefit of living in Phoenix is it has one of the fastest-growing job markets in the United States! Several industries have predicted job growth of more than 100% through the next six years including technology, transportation, real estate, construction, finance, and health care. While call centers are big in Phoenix, the city also has a thriving tech industry.

One of the perks of living in Phoenix? There’s always something fun happening! If you’re a sports fan, Phoenix is home to several sports leagues like the Phoenix Suns and Arizona Cardinals. There’s tons of live music venues in the city from small bars and lounges to concert halls and arenas like The Van Buren and Ak-Chin Pavilion. For cultural attractions, you’ll love the Phoenix Art Museum, the Phoenix Zoo, and the petroglyphs at Deer Valley Rock Art Center. 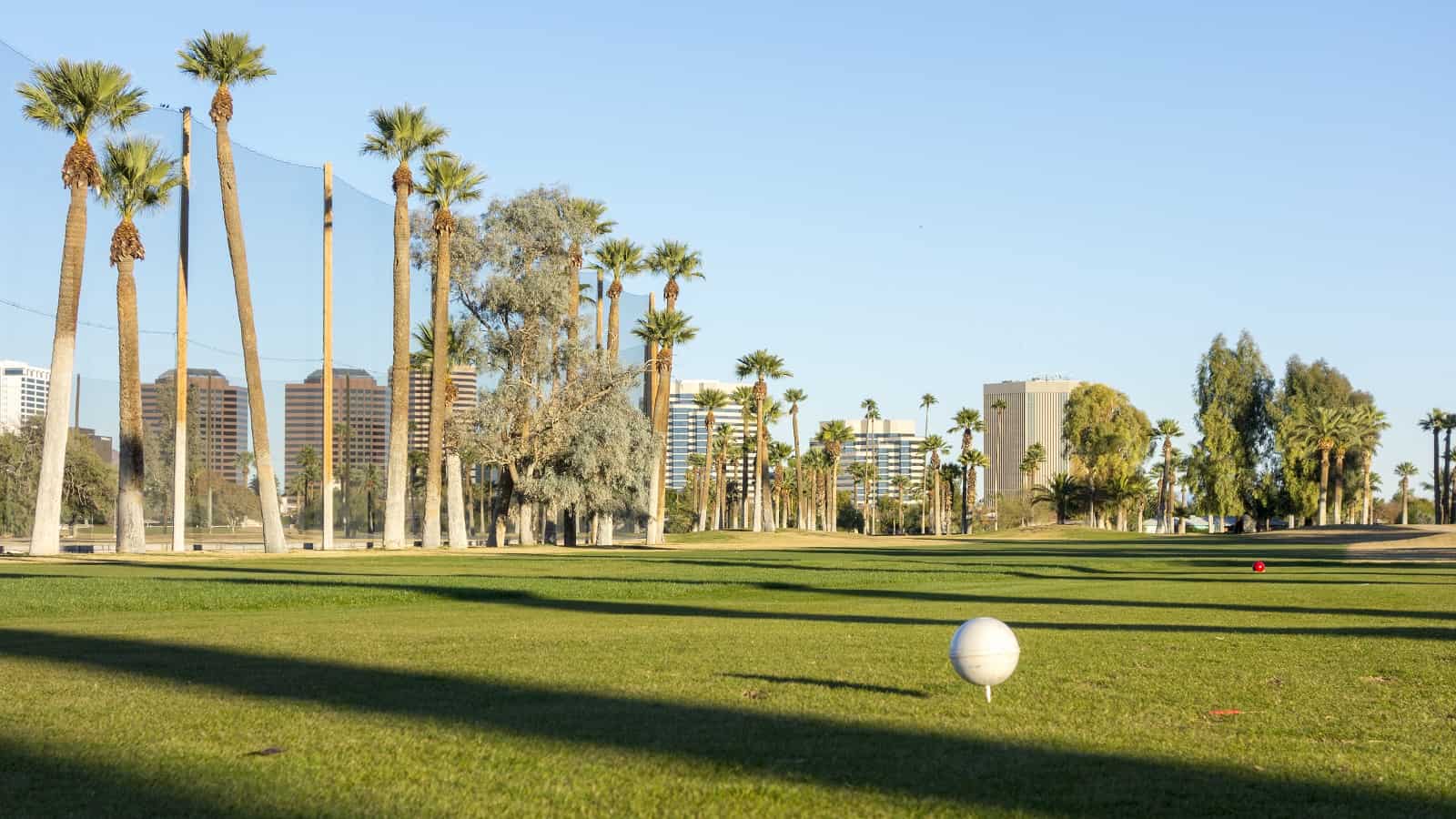 Las Vegas definitely has entertainment covered on its own but it caters to tourists and big-name acts. Make sure you consider its great attractions when you compare and contrast Phoenix pros and cons because you’ll find greater variety in Phoenix as opposed to Vegas with a number of venues and attractions of all sizes.

When you compare Phoenix vs. Las Vegas home prices, you’ll notice they’re very close. However, the Phoenix housing market shows no signs of slowing down! It’s remained one of the hottest markets for years with homes selling fast and prices climbing. Phoenix is always seemingly a great place to invest in real estate with a strong (and growing!) economy, rising rents, and its moderate prices. The average sales price of a home in Phoenix is $295,000, not far above the national average with plenty of room for growth. It’s still one of the most reasonably priced cities in the West, a definite plus of living in Phoenix. One of the challenges of Vegas is its real estate market is more volatile and one of the first hit when there’s a downturn in the economy.

Phoenix Is a Car-Dependent City

Phoenix is one of the least walkable cities in the nation, even more so than Las Vegas. It isn’t just the heat that makes Phoenix so car-dependent; it’s also notorious for its urban sprawl. Unfortunately, Phoenix doesn’t have great public transit to make up for this, ranking just 55th out of 100 major U.S. cities. There are light rail and bus options to help you get around though. 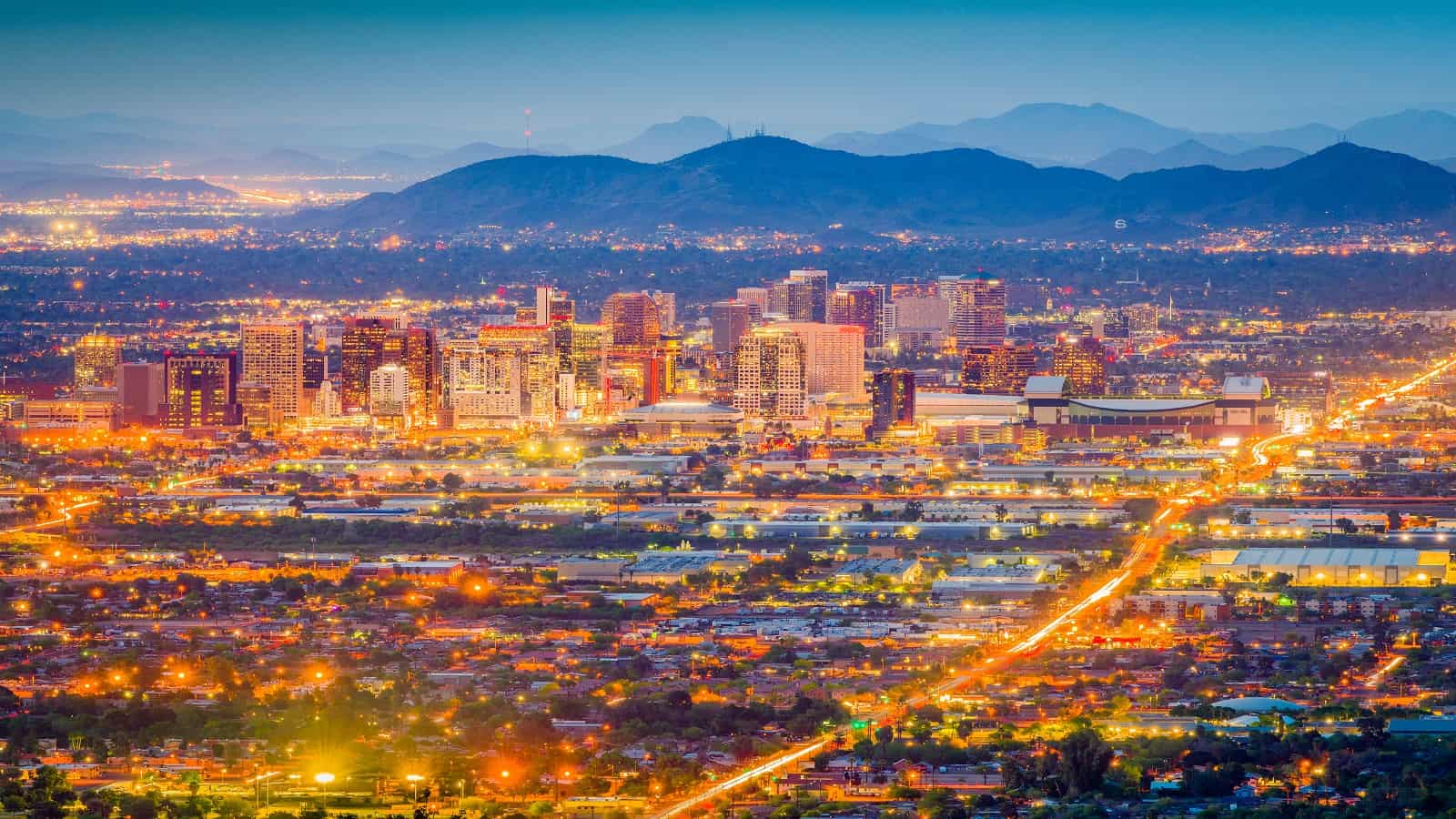 Las Vegas is a foodie heaven and it’s home to one of the nation’s best dining scenes. Since the early 1990s, casinos have been luring in celebrity chefs and this effect has spilled over into surrounding areas of Vegas with an even more amazing off-Strip dining experience. Las Vegas is now home to 10 Michelin-star restaurants including Joel Robuchon in the MGM Grand which was opened by Chef Joel Robuchon who went on to build an empire that earned him an amazing 30 Michelin stars worldwide.

A definite plus of living in Las Vegas is you’ll have top-rated restaurants at your fingertips and any type of cuisine you can imagine whether you’re in the mood for Japanese or French or you have a craving for khao soi or cochinita pibil tacos.

It’s true that Las Vegas never sleeps. It isn’t just the Strip that stays up late, either; you’ll find late-night eateries around town and bars and nightclubs that keep going. You can even go bowling 24/7! While this may not seem like a huge perk of living in Las Vegas, once you get used to being able to do almost anything at any time, it’ll be hard to go back to regular business hours.

If you have kids or plan to start a family, be aware that Las Vegas (and Nevada as a whole) has a bad reputation for the quality of its public schooling. Nevada consistently ranks last in the U.S. for education. The Clark County School District (CCSD) that serves Las Vegas is one of the largest in the country yet it’s been ranked as the worst in the nation, a big downside of living in Las Vegas. In one recent year, 75% of fourth-graders in Nevada were not proficient in reading and 44% of Nevada students didn’t graduate high school on time.

Tourists Are Everywhere in Las Vegas

While Phoenix definitely gets plenty of tourists and snowbirds, nothing compares to Las Vegas. Locals tend to avoid the Strip at all costs thanks to traffic congestion, crime, and tourist traps. One of the drawbacks of living in Las Vegas is the casinos and tourist attractions that dominate Vegas get old once you’ve lived in the city for a few months. 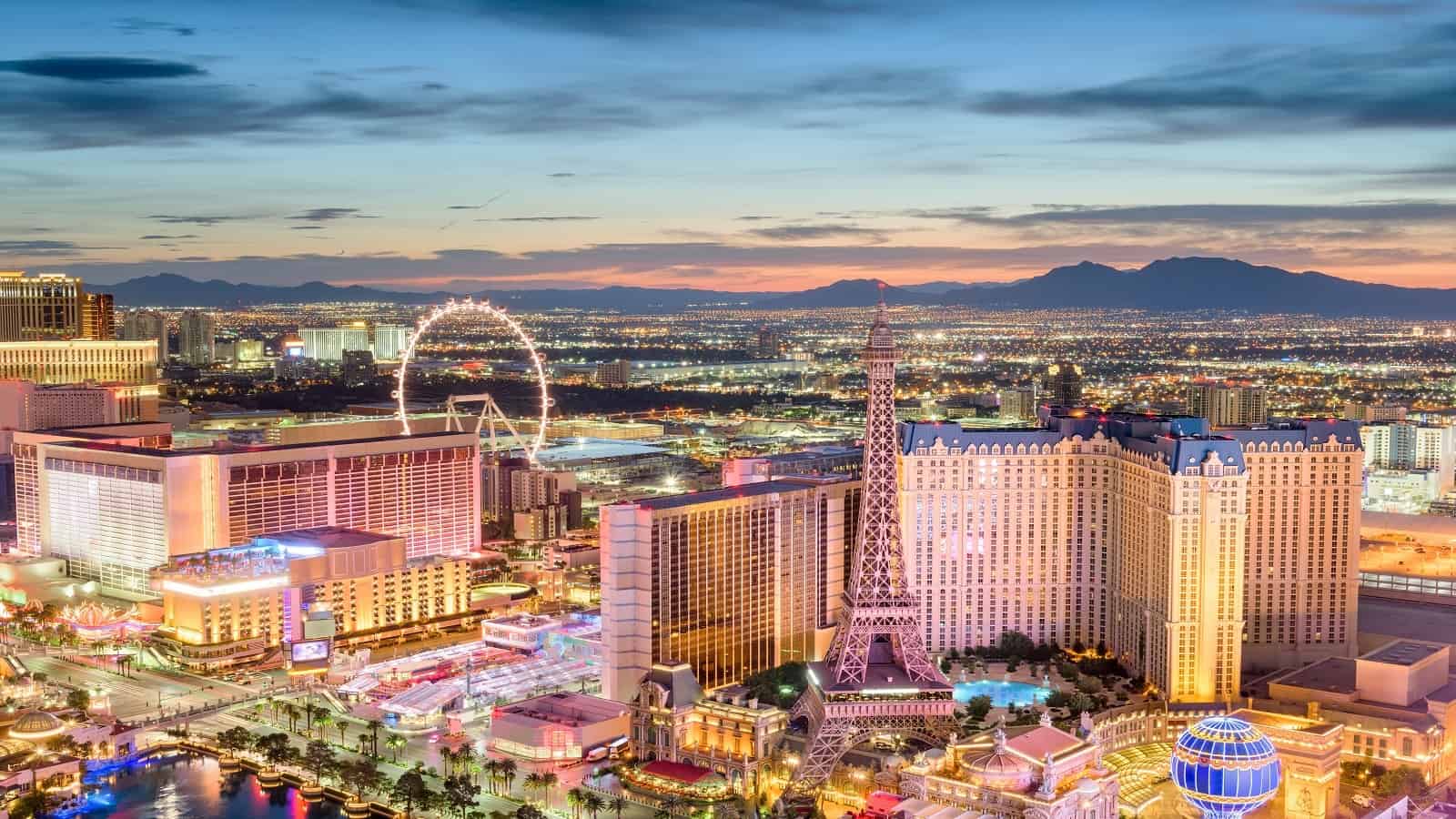 Cost of Living in Phoenix vs. Las Vegas

Surprisingly, a comparison of the Phoenix vs. Las Vegas cost of living shows they’re actually quite close although Las Vegas has higher restaurant prices (among the highest in the nation!) and Phoenix has higher grocery prices.

According to Numbeo, $4,257 is needed in Phoenix to deliver the same standard of living you get with $4,300 in Las Vegas:

Additional Things to Consider Between Phoenix Versus Las Vegas

When you compare Phoenix versus Las Vegas, you’ll quickly see Phoenix dwarfs Las Vegas in terms of population. The population of Phoenix is 1.66 million versus 645,000 in Las Vegas. The Phoenix metro area is the 11th largest in the U.S. with more than 4.7 million people. By comparison, the Vegas metro area has just 2.2 million people.

As you choose which city to make your home, safety is likely a big priority. Neither city ranks very high in terms of safety but Las Vegas has a slightly lower crime rate than Phoenix.

Phoenix and Las Vegas both have hot desert climates but there are some subtle differences between the two cities. Las Vegas does get colder in the winter (January low of 37 versus 43 in Las Vegas) while Phoenix gets a bit more rain. No matter which city you call home, be prepared for many summer days topping 105-115 degrees!

Traffic in Phoenix vs. Las Vegas

Everyone hates traffic and dealing with it every day can contribute to a low quality of living. How does Phoenix vs. Las Vegas compare when it comes to traffic congestion? Phoenix suffers from extreme urban sprawl which means even without traffic, driving from Gilbert on the east end to Buckeye on the west can take 60-90 minutes. In Las Vegas, everything is closer. When there is traffic, getting anywhere in Phoenix can take forever. By comparison, Las Vegas traffic gets really bad along the Strip and the highway, especially on weekends and rush hour, but otherwise it isn’t too bad.

One of the drawbacks of living in Phoenix is it’s ranked 15th in the nation for bad traffic while Las Vegas ranked 52nd.

Phoenix vs. Las Vegas: Which City Is Calling You?

What’s important to you as you plan for your upcoming relocation? Las Vegas is a great choice if you aren’t concerned about the quality of the public schools and want plenty of excitement and great eats. Phoenix is ideal if you want affordable living, great job prospects, and hot real estate market, and tons of things to do.

If you have settled on Phoenix as your new home, count on the dependable Phoenix movers at Mentors Moving & Storage to help make your relocation a breeze. Give us a call for a free moving quote today!

Or if you are planning to move from Las Vegas from Phoenix, our Phoenix to Las Vegas movers will assist with everything you need to make a efficient move!