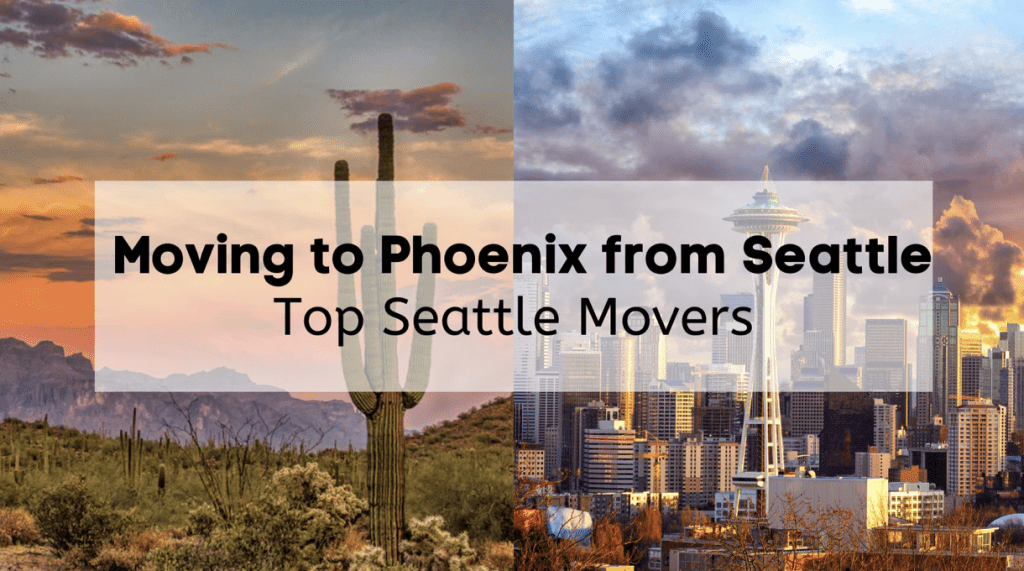 Planning a long distance move in the near future? While relocating to a new city can be incredibly thrilling, it can also lead to feelings of anxiety and stress. Whether you are relocating from Seattle to Phoenix for a career change, a big job promotion, or simply to be closer to family, preparing well in advance is the best strategy to achieve a smooth move. On top of hiring the best long distance Phoenix movers, learning about everything that’s involved with your upcoming journey is a must.

Most well-known for being the capital of Arizona, Phoenix is a wonderful place to reside. This southwest gem has warm and sunny weather year-round, and is acclaimed for its scenic deserts, world-class golf courses, and resort living.

The population of Phoenix is 1,624,539. This equates to a population density of 3,134.6 people per square mile. Its median resident age is 34.5, which is slightly less than the surrounding metro area. As of the latest figures, the median household income of Phoenix residents is $68,435. Its per capita annual income is $35,073.

What’s the weather like in Phoenix? According to the Köppen classification, Phoenix is in an arid or semi-arid climate classification. Even for individuals who’ve never been to Phoenix, it is well-known that the weather in this city is hot and dry. Average daily highs throughout the year range between 66°F in January to a whopping 106°F in July. Phoenix receives little rain throughout the year, and no snow. Annually, Phoenix receives about 8.04 inches of rain.

Benefits of Moving from Seattle to Phoenix

Living in Seattle or Phoenix comes with a myriad of advantages and perks. However, life between the two cities couldn’t be more different! Check out important comparisons between Seattle and Phoenix.

Wondering what the Seattle versus Phoenix crime rate is? As with all large cities, Phoenix and Seattle have a combination of safe and unsafe neighborhoods. While overall crime rate figures are helpful, it is ultimately most helpful examining each neighborhood individually before you relocate.

Looking at Phoenix versus Seattle in terms of weather and climate presents big contrasts. According to the Köppen Climate Classification, Phoenix has a desert/arid climate. This climate type is characterized by low yearly rainfall amounts and low humidity levels. Thousands of miles north, Seattle experiences a temperate climate. A temperate climate is known for producing wet, cool winters and mild summers with minimal rain. Seattle is known for being a rainy city, receiving about 37 inches of rain per year. Alternatively, Phoenix only sees 8.04 inches of rain annually.

Seattle and Phoenix are well-matched in terms of things to do. Both cities have excellent museums, entertainment, dining, and more for residents and visitors to enjoy. Top attractions in Phoenix include the Desert Botanical Garden, the Phoenix Zoo, the Musical Instrument Museum, and Camelback Mountain. In Seattle, the best attractions include the Space Needle, the Seattle Art Museum, Seattle Center, and the Seattle Children’s Museum. Because of its year-round warm weather, there are more things to do outdoors in Phoenix vs. Seattle, making it an ideal city for nature enthusiasts and golfers.

Families routinely compare Seattle versus Phoenix schools before relocating. Across grade levels, Seattle and Phoenix have highly-rated schools. Some of the best schools in Phoenix include Alhambra Traditional School, Desert Trails Elementary School, and Horizon Honors Elementary School (all have perfect 10/10 scores from GreatSchools.org).

Are you a sports fan comparing Phoenix to Seattle for their professional teams? There are roughly the same number of professional sports teams affiliated with Seattle and Phoenix. Once you arrive in Phoenix, there are plenty of teams to cheer on, including the Phoenix Suns (NBA) and the Arizona Diamondbacks (MLB).

Wondering what you can expect when hiring professional Seattle to Phoenix moving services? Discover a list of the many perks you’ll receive when working with our top-rated team:

Enlisting the expertise of a trustworthy, full service Seattle to Phoenix moving company is one the best things you can do to prevent delays, hassle, and stress while relocating. Our team will handle all of the tedious duties and heavy lifting so that you can focus on what’s most important to you!

Our five-star Seattle to Phoenix long distance movers go out of their way to ensure that your relocation to Phoenix is laid-back, well-coordinated, and efficient. As an added bonus, long distance relocation services are much more affordable than most individuals think. Enjoy the peace of mind that only a professional Phoenix moving team can offer!

What’s the best strategy for finding a top-rated Phoenix long distance moving company? Spending a few minutes researching key qualities and qualifications can save you hours of frustration down the road!

Completing over 1,200 moves per year, the team at Mentors Moving & Storage knows what it takes to exceed your every expectation. Employing 30+ staff members who undergo over 160 hours of mandatory training, your belongings are always safe with us. As an added bonus, we maintain a near-perfect 4.9 out of 5.0 rating on Google Reviews, further showing our commitment and devotion to providing an unparalleled relocation experience.

Curious about what it costs to move from Seattle to Phoenix? We are pleased to offer relocation services that are dependable and affordable — never compromising on quality. Your moving costs will largely depend on the number of miles you are moving, the volume of your belongings, and whether you are moving during an off or peak season.

Additional factors that determine the price of your relocation include:

According to Moving.com, the average cost to move from Seattle to Phoenix ranges between $4,767 – $6,681. Please be aware that these figures can vary significantly due to the previously listed variables. Get a better grasp on how much you’ll be spending by requesting a custom moving quote from Mentors Moving.

Charting your route from Seattle to Phoenix? Since the two cities are so far apart (1,109 miles to be exact), the preferred choice for most people is to fly.

Alternatively, if you plan to make the 21+ hour drive, the best route to take is via Interstate 84 E to US-93 S. Here are driving directions from Seattle to Phoenix.

Want help with preparing for your relocation from Seattle to Phoenix? Bypass all of the stressors and hassles commonly associated with the moving process by hiring the best long distance Phoenix moving company. Contact our team today to request your custom moving services quote!