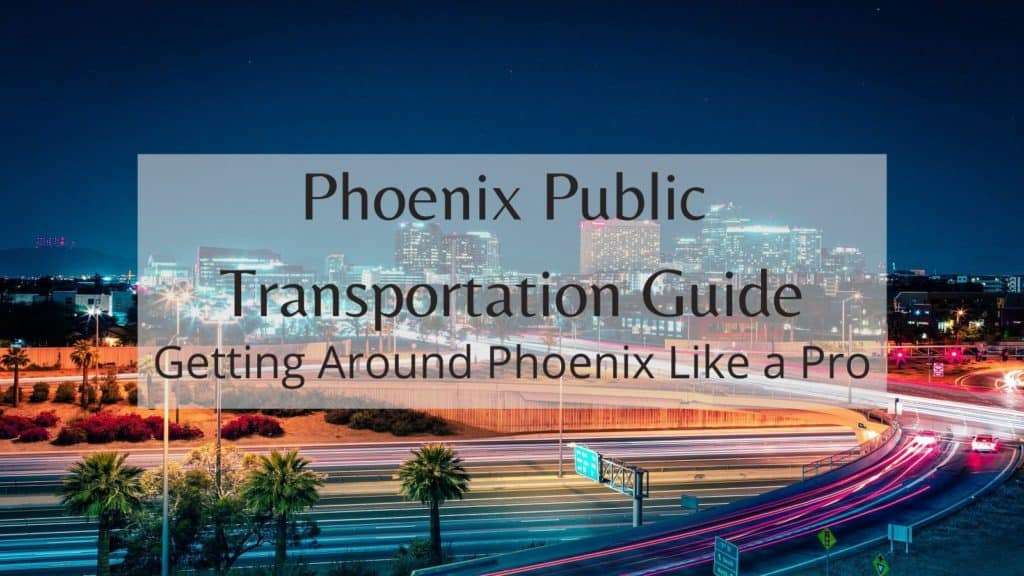 Phoenix Public Transportation Guide [2022] | Getting Around Phoenix Like a Pro

Phoenix, Arizona is one of the most car-dependent major cities in the United States thanks to significant urban and suburban sprawl. Despite the poor city planning from the boom in the 1950s and 1960s, things are changing with a fairly new light rail system that has made it easier to reach popular Phoenix destinations without a car. Does Phoenix, AZ have good public transportation? While it isn’t the most comprehensive system, there is a good light rail and bus system to help you get around. Whether you’re hoping to commute to work via public transportation in Phoenix or you’d like to go completely car-free, here’s a complete guide to getting around in Phoenix without a car.

Valley Metro Rail has only been operating since 2008 but it’s expanded twice with at least five additional expansions planned.

The fare system for Valley Metro Rail is shared with the Valley Metro Bus system. Tickets are purchased from vending machines at station entrances. Full fare is $2 for one ride or $4 per day with reduced fares for children, teens, people with disabilities, seniors, and Medicare recipients. Reduced fares for public transportation for seniors and students are half-off.

The Valley Metro Rail line starts at the 19th Avenue/Dunlap station in Phoenix and continues downtown. At Roosevelt, it splits with two one-way segments toward Mesa and Dunlap. The tracks rejoin on Washington Street and goes past Sky Harbor Airport and toward Tempe.

Full service on the light rail starts at 4:30 am Monday through Friday and 4:50 am on Saturday and Sunday with service ending at 1 am on weeknights and 3:25 am Friday and Saturday mornings.

Getting Around in Phoenix by Bus | Valley Metro Bus

Valley Metro is the primary Phoenix, AZ public transportation operator and it runs the light rail and bus systems in Phoenix with a unified fare system. Founded in 1993, Valley Metro Bus has local, express, and shuttle buses with 104 bus routes that include community circulators, regular routes, and limited-stop routes.

Bus frequency and hours vary by route but most bus routes operated by Valley Metro run every 10-30 minutes and as late as 3:30 am. The super-grid bus system has 60 local routes with numbers based on the Phoenix street grid. Route 0 runs north to south along Central Avenue, the zero point that separates west and east Phoenix. Route 35 runs along 35th Avenue, the 3500 block on the grid.

The City of Phoenix permits a number of bike share programs including docked and dockless bike shares. Bike share is an affordable way of getting around in Phoenix without a car, especially in downtown Phoenix, with the average bike share user traveling 1 mile per trip.

There are three companies permitted to operate bike sharing programs in Phoenix:

The cost of this alternate form of public transportation in Phoenix depends on the bike share program. With Grid, you can pay as you go ($0.12/minute with a $7 deposit) or pay for a $10 weekly or $20 monthly pass. PACE costs $1 per 15 minutes. Lime-E electric assist bikes are $0.15/minute and $1 to unlock while Smart Pedal bikes are $1 per 30 minutes.

One of the most popular options for getting around Phoenix is rideshare services. There are three rideshare companies in Phoenix: the giants Lyft and Uber as well as zTrip which is similar but does not have surge pricing for more predictable fares. zTrip launched in Phoenix in 2016 with black cars or taxis. Users who choose a taxi ride with zTrip can pay with cash. Unlike Uber and Lyft, zTrip only uses professional, licensed drivers who have completed a background check. zTrip was developed by TransDev, a transportation company involved in the Phoenix bus strike in 2016, in partnership with local companies like Yellow Cab Arizona.

Want to know how to get around in Phoenix with public transportation? Here’s how to reach a few of the city’s top destinations with Phoenix public transit.

How do I get from Sky Harbor Airport to downtown Phoenix?

There is a free people mover that connects Phoenix Sky Harbor Airport to the Valley Metro Rail system. Catch the PHX Sky Train from the 44th St/Washington light rail station.

What public transportation is in Phoenix?

Phoenix has a bus system and light rail system operated by Valley Metro. Other options for Phoenix, AZ public transportation include bike sharing, ridesharing, and e-scooters.

How do I get from Phoenix to Scottsdale on public transportation?

The Valley Metro Bus system covers Phoenix and Scottsdale. There are express shuttles between Scottsdale Road and downtown Phoenix on routes 512 and 510.

While Phoenix doesn’t have the country’s most well-developed public transit system, public transportation in Phoenix is improving and the light rail and bus systems can help you easily commute downtown and reach popular destinations without a car. Are you thinking about relocating to Phoenix now that you have a good idea of how to get around? Call the award-winning Phoenix movers at Mentors Moving & Storage today for your free moving quote!