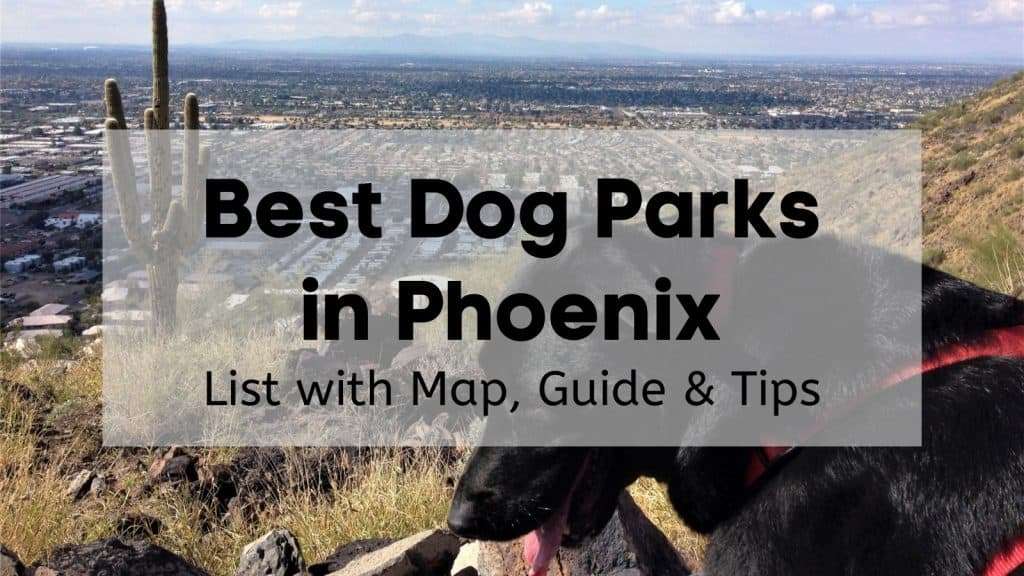 In Phoenix, you can’t go far without coming across a park of some kind, be it a picnicking area, sports arenas and courts, or playsets for the little ones. Dog parks are much the same – you’ll be flooded with options for great dog parks in the Phoenix area! In fact, the flood of options might be a little overwhelming. From off-leash, to indoor, fenced, free and parks for small dogs! That’s why you should read this blog to find out all the nitty-gritty details of Phoenix’s best dog parks!

Don’t fall into a trap of thinking all dog parks are created equal, as dog parks are just as varied and distinct as our sweet little canine pals. Different sizes, facilities, and more will all have to be taken into consideration to find the park that best suits your dog or dogs. Check out the rest of this blog to see what we at Mentor’s Moving consider to be the best dog parks in Phoenix. We’ve got descriptions of the parks, lists of amenities, and unique features that’ll be sure to pique your interest. Don’t forget to take a look at our compiled map of Phoenix-area dog parks at the bottom!

Yes, that name does in fact indicate that this park is sponsored by PetSmart, which they’ve done in a wider effort to form more pet-friendly parks around the city. Judging by the many favorable reviews by locals, they’ve been doing good so far! Aside from drinking fountains and bag dispensers that any worthwhile dog park will have, the PetSmart Dog Park has an incredibly dog waste stations, being a section of the larger Washington Park, which has plenty of open space and an iconic playset for the kids. So, you can let the dogs frolic while you let the kids frolic in perfect view!

This might be an unconventional option in regards to dog parks, as few would ever consider going to a dog park right by an airport under normal circumstances, but the convenience of this relief area, with benches and water for the puppies, being located just outside Terminal 4 is great for those traveling with their pooches. Perhaps not the kind of park you’d visit on a nice day, but certainly useful to know about for those who love to see the world. You can access the Sky Harbor Boneyard park while either entering or leaving the airport.

If you’re ever out in the suburbs south-east of Phoenix proper, you’ve got to visit the Cosmo Dog Park. Winner of Dog Fancy’s “Dog Park of the Year” award in ‘07, Cosmo Park features the typical array of fenced-in, off-leash areas, drinking fountains, and so on, but those aren’t what draw in Phoenix residents. Rather, it’s the shallow lake, which has a sandy shoreline that provides the perfect place for dogs to romp around in or near the water. Not every dog likes water, but if yours does, Cosmo Dog Park is a must-visit.

The Rose Mofford Sports Complex is primarily known for hosting baseball and soccer fields, used by a variety of groups around the city. However, it’s also home to a sizable dog park, with large fenced-in areas, perfect for letting your dog run wild and get all that energy out. In fact, the park itself covers more than two acres, so there’s plenty of space for dogs of all sizes to explore and run around in! This park is located in the northern portion of Phoenix, right around the North Mountain Village area.

The Grover Basin Dog Park, also known as the Echo Mountain Off-Leash Arena, is widely beloved by Phoenix locals as a relaxed spot for all the typical activities you’d undertake at a dog park. That this place has dog waste stations, benches, and more, should go without saying at this point, but an additional appeal of this park is the separate off-leash areas for big dogs and little dogs. If you ever get nervous about your little purse puppy being around German Shepherds or Great Danes, this might be the park for you. This park is located in the northern section of Phoenix, right by Campo Bello.

The Steele Indian School used to be a school which educated Amerindians, more or less seeking to integrate them into American society by way of severing their ties with their tribes. Although the school has long since been out of operation, the site was nevertheless preserved as an interesting look into the success stories and hardships that came along with such a complicated environment. Transformed into a beautiful park, part of the park has also been converted into one of Phoenix’s most beautiful dog recreation areas. Aside from the typical amenities, this park is spacious and has plenty of play and run areas, as well as a wonderful spot right next to the beautiful Steele Indian Park. This park is located in the Uptown area.

The RJ Dog Park is a parcel of the larger Pecos Park, a large park at the southern outskirts of Phoenix. “RJ” was the name of a Phoenix police K-9 officer who was killed by a criminal in 2005. The dog park here was named in his honor, and another memorial in the city also commemorates RJ in the center of the city. The park itself is two acres of fenced and leash-off park areas, with separations for small and big dogs like Grover Basin. All the typical amenities, like drinking fountains and waste stations, are here, but be sure to take extra care to clean up after yourself! This isn’t just a dog park, it’s a memorial too.

Located south of the Encanto Village area, Hance Dog Park is a large park that’s especially well-known for its accommodation for large dogs, which is why many dog owners in the area choose to go here instead of other parks. It has fenced-in run and play areas, benches, drinking fountains, waste stations, and more.

Want to know which dog parks are closest to you? Take a look at this map to see where all the dog parks we recommend are!

Don’t let us make you think that’s all that is out there, though! Phoenix is a big city that’s only growing bigger, and that means that there are plenty of places for your pooch to spend an exciting day outdoors.

If you’re already in Phoenix, great! We hope you found this guide useful. However, if you’re planning on moving to Phoenix and are scouting out dog parks in the area before you make the final call, Mentor’s Moving is willing and able to help! We have a Phoenix moving crew at your beck and call, ready to make a relocation of any kind easy! All you have to do is give us a call at 480-619-8240 or fill out the quote form on our website. Trust us when we say that in the Phoenix area, there’s nobody who can do it better than Mentor’s Moving can!