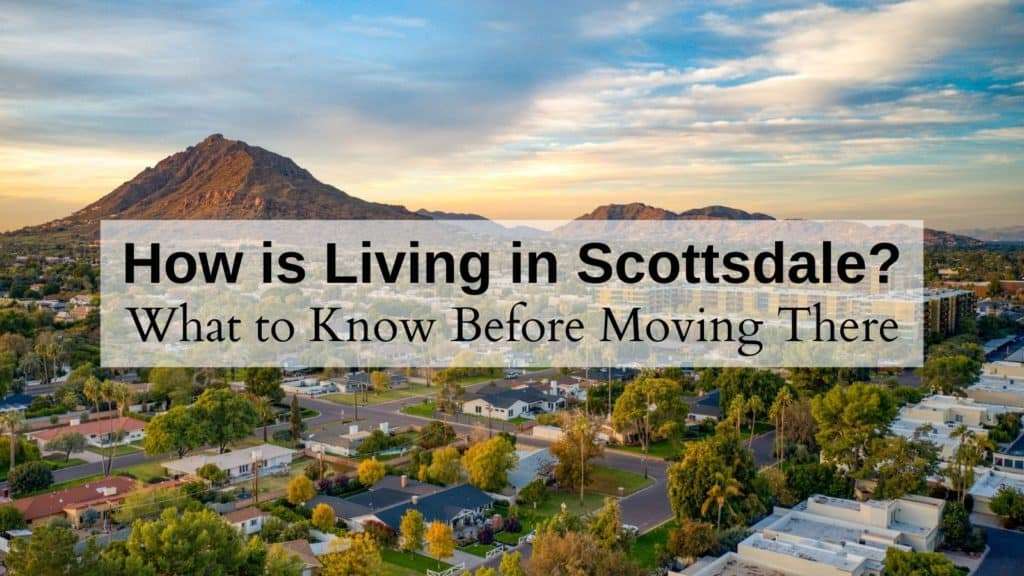 How is Living in Scottsdale? | 🏜️ What to Know Before Moving to Scottsdale

The city of Scottsdale, AZ is known for being one of the most desirable places to live in the entire United States and is even recognized internationally by people across the world. Among its many amenities, Scottsdale has top-rated luxury resorts, upscale restaurants, more than 70 art galleries, and museums, as well as some of the best shopping destinations in Arizona.

Located about 13 miles northeast of downtown Phoenix, Scottsdale is bordered by neighboring cities of Tempe, Mesa, Fountain Hills, Carefree, and Paradise Valley. Scottsdale is officially nicknamed “The West’s Most Western Town” because of its long-time cowboy culture and history dating back more than 140 years.

Established in the early 1880s, the land that now makes up this area was purchased by U.S. Army Chaplain Winfield Scott and his wife Helen. It was originally called Orangedale because the Scott family had planted a large spread of citrus groves across the area. It quickly became a popular location for well-educated people who wanted to create an upscale lifestyle in the city.

The town was renamed Scottsdale for its founders Winfield and Helen in 1894. Scottsdale was officially incorporated as an Arizona city in 1951.

As a great place to live, thousands of people are still moving to Scottsdale every year. One of the most interesting facts about Scottsdale is that it is the number one destination in America for retirees.

The population in Scottsdale is 258,064 residents with a median age of 50 years old, making it the 5th most populated city in Arizona. The biggest decade of growth came during the 1990s when more than 70,000 people moved to Scottsdale. Even now, it continues to see major growth with 45,000 newcomers relocating to Scottsdale in the past 10 years.

Scottsdale demographics give a clear picture of the diversity in the area as it is made up of 81% Caucasian, 8% Hispanic or Latino, 5% Asian, and 2% Black or African American. The gender ratio in Scottsdale is about 52% female and 48% male.

The Scottsdale population has an ancestry of 19% German, 13% Irish, 11% English, 8% Italian, 4% Polish, and a variety of others. And with an average of about 2 people per household in Scottsdale, about 50.8% of residents in the city are married couples.

The median household income in Scottsdale of $86,097 is higher than the national average and presents a good idea of how affluent the city is. Almost 40% of residents living in Scottsdale make salaries of over $100,000 per year.

2. Cost of Living in Scottsdale

Known for its affluent neighborhoods and upper-class lifestyle, the cost of living in Scottsdale is 31% higher than the Arizona average and 33% higher than the national average. While expenses like healthcare and home utilities cost less than state averages, the higher end of spending comes from local transportation, food, and housing.

What does it cost to live in Scottsdale? Is Scottsdale affordable? Well, some of the groceries that cost more than average include a gallon of milk for $3.19, chicken filets for $5.33 per pound, and $3.36 for a dozen eggs. A slight balance can be found because of the lower utility prices; Scottsdale’s average monthly utility bill is $157.23..

According to Numbeo, these are estimated amounts that residents in Scottsdale pay for the most common expenses:

Scottsdale housing prices are the largest impact on Scottsdale’s high cost of living.. The average listing price of a home in Scottsdale is $700,000, though the median sale price is closer to $595,000 for a house. These numbers equal out to a median sale price of $279 per square foot and typically require an average down payment of 23% in most areas. The real estate market in Scottsdale is somewhat competitive with homes usually going pending in about 41 days.

The Scottsdale homeownership rate is 66%, about 12% higher than the nearby city of Phoenix. Scottsdale, AZ homes for sale have a wide spread of possibilities with locations ranging from a handful of humble mobile homes to huge properties that are worth over $30 million.

The most affordable places to live in Scottsdale include Arcadia, South Scottsdale, and some areas around Old Town Scottsdale. Looking at the other side, the most expensive Scottsdale communities are Silverleaf, DC Ranch, Encanto Norte, Pinnacle Peak, Happy Valley Ranch, and Desert Mountain.

According to the TaxJar calculator, the Scottsdale sales tax is ranked the 11th highest out of the 50 United States at 8.050%. You can see the sales tax in Scottsdale breakdown here:

As anyone preps for relocating to Scottsdale, finding the right community is an important part of the process. There are plenty of beautiful Scottsdale neighborhoods to choose from that offer a huge supply of nearby amenities and perks. 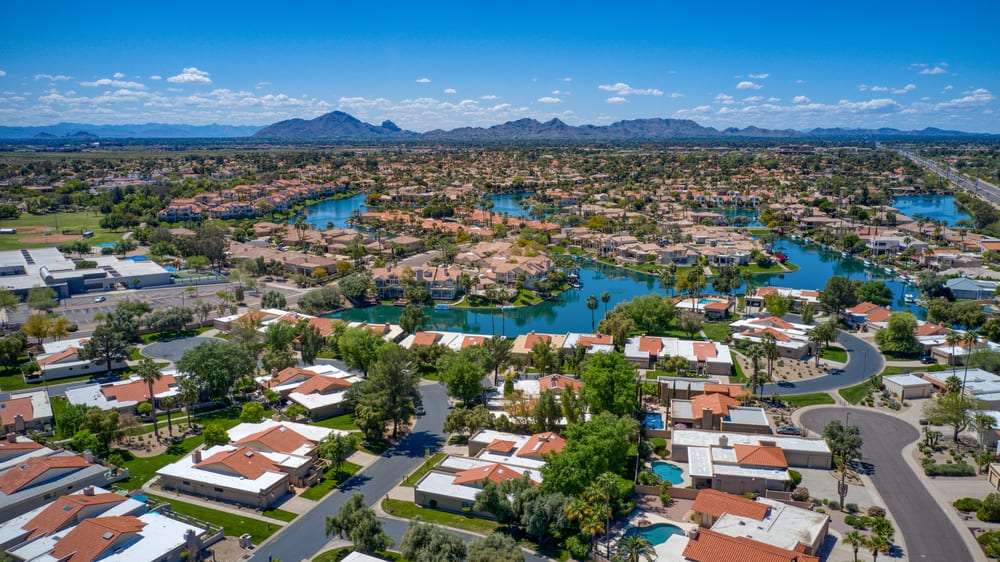 Scottsdale covers 184.4 square miles and is located toward the northeast side of Maricopa County in Arizona.

Map of the Best Scottsdale Neighborhoods

4. Things to Do in Scottsdale

With some of the best museums and the most popular shopping destinations in the state and even in the country, there are so many amazing and fun Scottsdale activities. From top-rated attractions and entertainment venues to museums and local parks, you’ll never have to go far when searching for enjoyable things to do in Scottsdale. When relocating to Scottsdale it’s a great idea to see what amenities are available around town.

Fine dining seems to come standard at Scottsdale restaurants with great places to eat found all over the city. No matter what your palate is hungry for, there is sure to be a restaurant in Scottsdale ready to fulfill your craving. Some of the most well-known locations to eat in Scottdale include:

Before relocating to Scottsdale, one of the most important steps is to make sure you have your local utilities set up ahead of time. This includes bare essentials such as electricity, water, sewer, trash, and natural gas if your home is equipped for it. Knowing the utility providers in Scottsdale will give you a head start and ensure you have the lights on when showing up to your new home.

Electric (Based on Where You Live)

Along with setting up your utility accounts, another key aspect of any relocation is changing your address in Scottsdale. The Arizona Motor Vehicle Division and state laws state that it is mandatory to notify them of your address change within 10 days of relocating to Scottsdale.

Scottsdale gets the benefit of being close enough to Phoenix that they can easily root for and attend the same major sporting events. The area is home to sports teams in each of the four professional major sports associations.

Sports events in Scottsdale include:

Scottsdale hosts the Phoenix Rising FC professional soccer team, which plays at the local Casino Arizona Field. The Salt River Fields at Talking Stick are the location where the Arizona Diamondbacks and Colorado Rockies hold their spring training games.

The average commute time in Scottsdale is less than 20 minutes on average. Almost everyone living in Scottsdale owns a vehicle but there are still public transportation options available for local residents.

The Valley Metro serves Scottsdale with numerous bus routes spanning various parts of the city. Bus stops are easily found with benches and blue signs along the side of the road.

Scottsdale rideshare programs are readily available with popular companies like Uber or Lyft. You’ll rarely have to wait for more than a few minutes to get a ride to wherever you’re going. 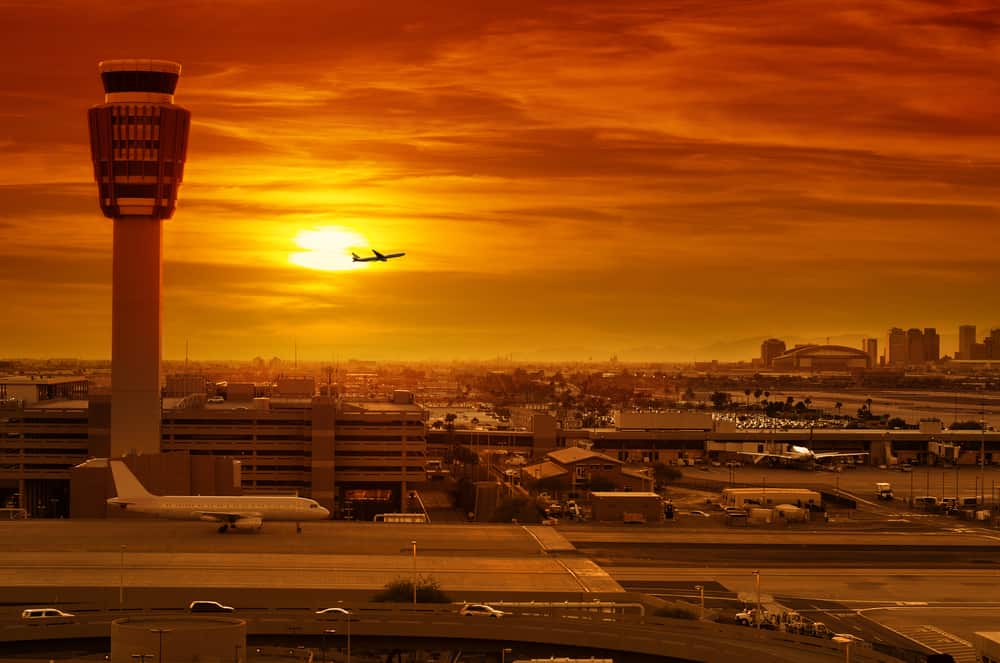 Phoenix Sky Harbor International Airport is the most commonly used airport for people residing in Scottsdale. But there are a handful of other locations around the city including:

Scottsdale is the 13th safest city in Arizona thanks to its secure neighborhoods and gated communities.

According to FBI reports, the crime rate in Scottsdale is 15% lower than the national average overall. There is only a 1 in 48 chance of becoming a victim of crime in Scottsdale.

The area is also becoming safer as Scottsdale crime has dropped by more than 12% in the past year. If you’re searching for the safest places to live in Scottsdale, the Pinnacle Peak neighborhood is safer than 96% of the cities in Arizona. On the other hand, the crime rate in South Scottsdale is 37% higher than the national average. Scottsdale is a very safe place to live.

An interesting fact about Scottsdale crime is that it’s illegal to cut down certain plants in the city including the giant saguaro cactus. Anyone who cuts down one of these native Sonoran Desert cacti will face a large fine and between one to four years in jail.

The current unemployment rate in Scottsdale is 4% but the area has played a key role in helping Arizona’s gross domestic product (GDP) increase 3.1% from 2018 to 2019, achieving an all-time high of $265 billion for the year. 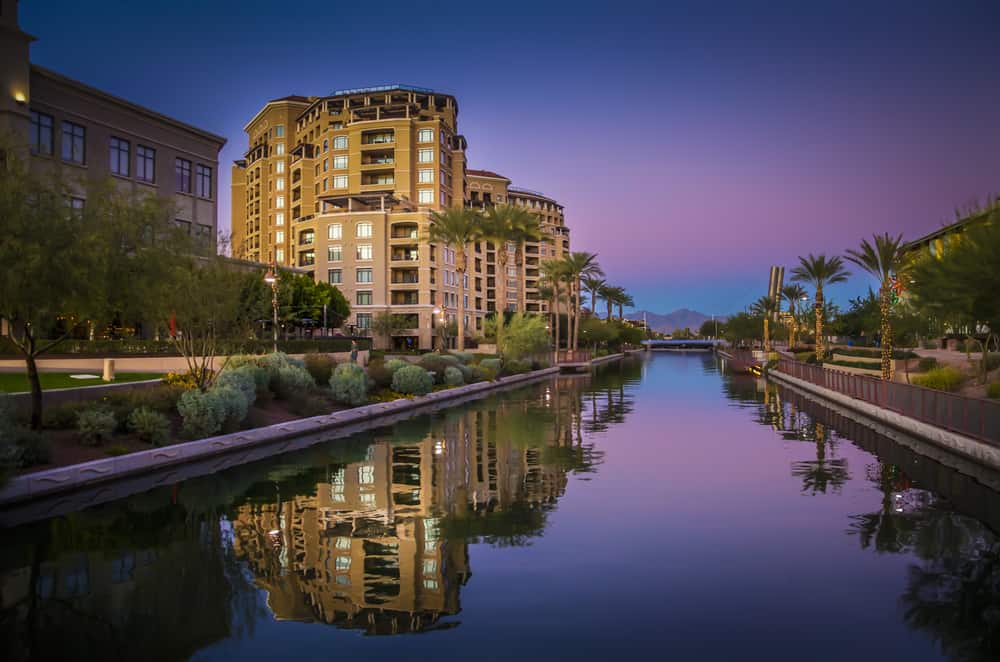 The largest employers in Scottsdale are:

The top industries helping the Scottsdale economy are:

Best Places to Work in Scottsdale

With about 38,700 children under 18 years old living in Scottsdale, they make up about 15% of the city population. Schools in Scottsdale are some of the most highly-rated in the United States with top programs ranging from elementary school up to college.

Parents get to send their kids to some of the top schools in the country here in Scottsdale with the best programs at local school districts like:

The top schools in Scottsdale are:

Offering online courses and in-person learning, the nearest colleges to Scottsdale include:

And for a unique college experience, the Arizona Cowboy College is a family-owned Scottsdale business that teaches students how to be cowboys and cowgirls.

The city of Scottsdale follows the Phoenix Valley trend of hot summers, low annual rainfall, and cool, comfortable winters in its desert climate. Experiencing extreme high temperatures during the hot months, you’ll often see temperatures well into the 100s. But relief comes after a few months as most of the year brings cooler temperatures and mild Scottsdale weather.

July is the hottest month in Scottsdale as high temperatures reach averages of 106°F and lows in the mid-70s at night. The temperatures dip in the coldest month of December as residents living in Scottsdale experience weather between the mid-30s in the evening and upper 60s during the day. Scottsdale gets minimal precipitation throughout the year with only about 11 inches of annual rain.

The best time to visit Scottsdale is when temperatures are at their most comfortable in the middle of spring or fall. But most Scottsdale residents still find themselves enjoying the outdoors even in the hottest part of the summer, making sure to keep water and sunscreen handy at all times.

Anyone thinking about relocating to Scottsdale will find the city is flowing with fun activities, amazing shopping destinations, and gorgeous homes. The team of trusted Scottsdale movers here at Mentors Moving is committed to assisting people with their relocations to and from this great city. Give us a call today at (480) 619-8240 or complete the Request a Quote form for a free moving estimate!

Exercise is an essential part of being fit and healthy. One way to get moving is to hit the gym! Going to the gym isn’t just a great way to get in shape, but it’s

Gold Canyon is located in Pinal County and is a census-designated place. This beautiful community is keen on and known for outdoor adventures: hiking, horseback riding, mountain biking, art events, and golfing. It’s a desert