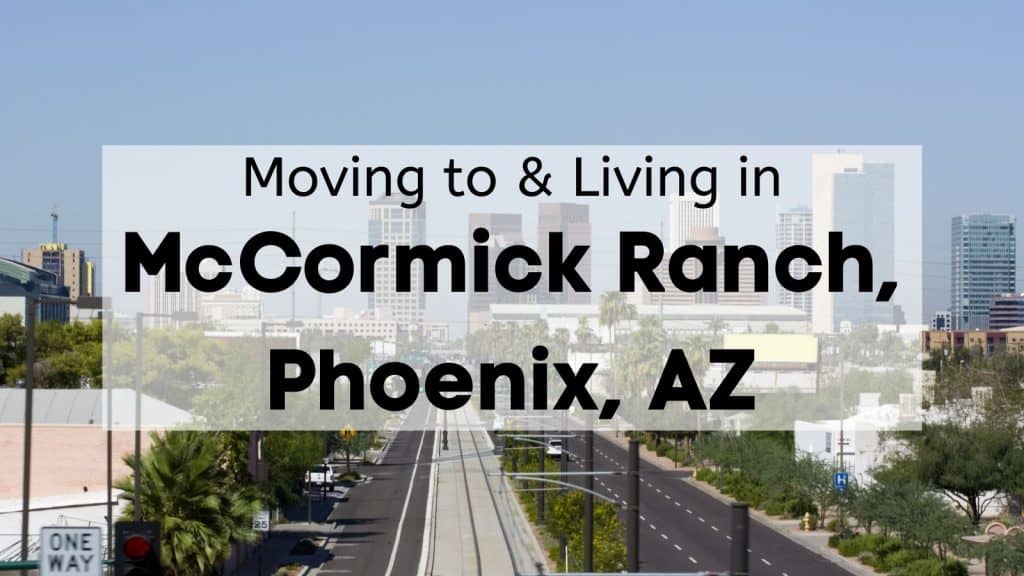 McCormick Ranch, located in the northern portion of Scottsdale, is well known as an affluent, nice neighborhood, and holds the title of largest planned community in all of Arizona – pretty impressive, considering the sheer number of communities of that type in the state! It’s further known to be the home of 2 championship golf courses, almost 30 miles of bike paths, and seven man made lakes. The area is well-liked for its unique set of things to do and lovely properties. All the typical benefits of living in Scottsdale – class, safety, and plenty of attractions – are equally or even more so present within McCormick Ranch, which is why many Scottsdale residents choose to make this neighborhood their home.

McCormick Ranch gets its name from a convoluted series of property transfer in the early 20th century, starting in 1921. That year, a family with the last name “Jolly” built out a 160-acre ranch on the grounds of what is today the corner of Scottsdale and Indian Bend roads. This ranch was purchased twenty years later by one Merle Cheney.

Cheney rather quickly sold the property off to the McCormick family, who were buying up parcels of land all around the area at the time. Also contemporarily, they used the home as a winter home, owing to Arizona’s nice weather during that season. The McCormick family were certainly not poor (one of their grandfathers was the famous John D. Rockefeller), and they used that money to fund a passion in Arabian horses during the ‘50s.

After the death of the McCormick matriarch, the land was sold to Markland Properties, a development firm who, in the 1980s, began to develop the land into a residential area. Incorporated just two years later, the community had bike trails, public tennis courts, parks, and more. As of today, it’s a highly affluent and safe community, home to many of Scottsdale’s finest residents.

McCormick Ranch sits in what is generally considered central Scottsdale, between Indian Bend Road and Shea Boulevard. McCormick Ranch is bordered by Paradise Valley to the west, and the Salt River Pima-Miracopa Indian Community.

With its central position in the city of Scottsdale, it goes without saying that getting around the area and Scottsdale and Phoenix in general. On the eastern border, the community links up with the 101, offering an easy way to get on the highway and get to where you need to go. In terms of air travel, McCormick Ranch is near the Scottsdale Municipal Airport, and public transportation on the road is provided by Valley Metro.

Biker rejoice, as McCormick Ranch is well known as an area with many, many bike trails. You’ll have plenty of ways to get around here!

McCormick Ranch’s appeal is a wealth of public amenities, as well as local attractions and easy access to the wider Phoenix-Scottsdale metropolitan area. As well, the beautiful properties and close-knit community also draw in many individuals. This is a truly one of a kind community in Scottsdale!

What to Eat, Do, and Shop in McCormick Ranch, Phoenix, AZ

It’s true, McCormick Ranch is mostly residential, but don’t let that fool you into thinking there’s nothing to do around here! In fact, McCormick Ranch’s wide variety of attractions, shopping, and restaurants, is well-renowned in the Scottsdale area. For instance, the Pavilions at Talking Stick hosts a multiplex movie theater, restaurants, and high end stores, and there’s hardly a place on the eastern side where you won’t find great establishments like these!

As you’d expect, excellent restaurants are among the repertoire of fine establishments in the McCormick Ranch area. For instance, the widely popular Grassroots Kitchen & Tap offers a lovely cafe setting with a focus on organic and local food, a great way to get both healthy and environmentally conscious food with a charming setting. The Twisted Grove Parlor is more for the casual nights, with a bar, great food, and plenty of screens for watching the big game!

In case we didn’t make it clear, golf is a big deal here in McCormick Ranch! The main two courses in the neighborhood, the Palm and Pine Course, are hosted by the McCormick Ranch Golf Club.

Restaurants will keep you well fed, but how about staving off boredom? Thankfully, McCormick Ranch also has plenty of attractions as well. Two of the most popular of these among locals are the OdySea Aquarium and the Butterfly Wonderland, both located in the same compound just east of the neighborhood’s eastern bounding road. OdySea Aquarium is a countrywide renowned aquarium with humongous exhibits displaying all sorts of incredible life from the sea. Butterfly Wonderland, meanwhile, is an interactive, indoor exhibition of thousands upon thousands of butterflies – truly a sight to see! However, the attraction most often visited by those from outside McCormick Ranch is undoubtedly the Talking Stick Resort, a full-service resort with pools, restaurants, excellent room and board, and more, which also hosts much of the local businesses in the area (such as in the aforementioned shopping mall).

As you might expect out of an affluent planned community such as this neighborhood, McCormick Ranch has prices that are significantly higher than the rest of Scottsdale, whether that be in property prices or utilities. The median sale price of a home in McCormick Ranch is around $750,000, which is higher than the Scottsdale median of $493,200. For the purpose of comparison, the median property price in Arizona is $242,000. According to Redfin, the median amount of time for a house to be on the market in this area is 22 days, with 52% of homes being sold above listing price. Needless to say, many people want to live here, and it’s a competitive market as a result.

Data for average rents in the McCormick Ranch area is not available, but prices in the mid-1000s for single bedroom apartments is not uncommon. This somewhat bucks the trend for the area, as the average monthly rent in the Scottsdale area as a whole is $2,138. As a mostly residential area, McCormick Ranch isn’t really a place that lends itself well to renting, but you’ll still be able to find it here regardless.

In terms of education, McCormick Ranch is served by the Scottsdale Unified School District. Many of Scottsdale’s best schools are very close by, including most notably the excellently rated Cochise Elementary School.

Does McCormick Ranch charm you with its loveliness? Planning to take the leap and make it your new home? Moves are no easy feat and they certainly shouldn’t be done by yourself, lest you get a bunch of new gray hairs. You’ll be better off hiring a professional team to do the job for you! Give Mentor’s Moving a call! Our trusted and highly trained McCormick Ranch moving crew will ensure your move is easy, simple, affordable, and quick, as many of our satisfied customers can attest! Call now at 480-619-8240 or fill out our online form for a free quote!