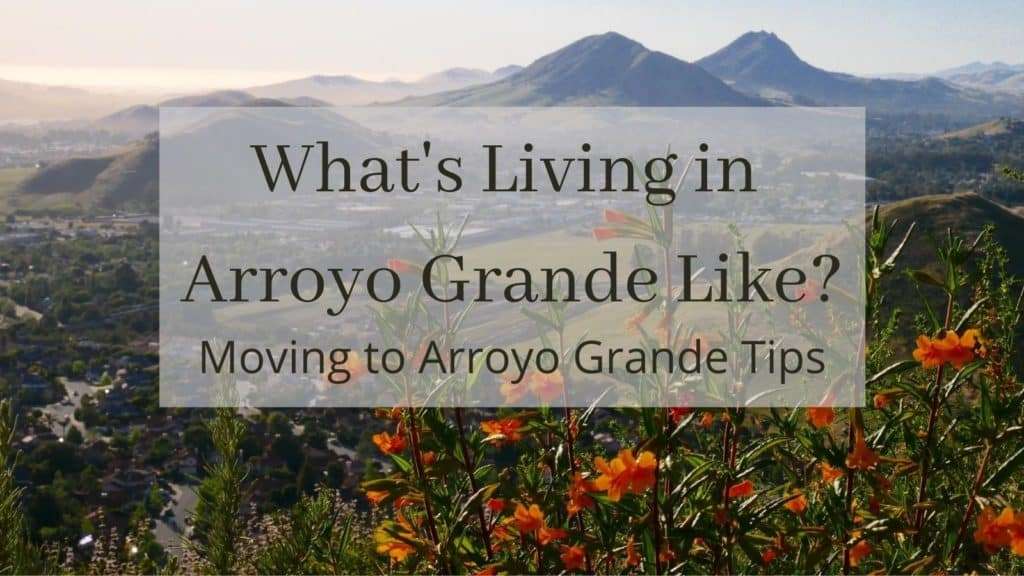 The small city of Arroyo Grande, only 16 miles south of San Luis Obispo and just inland from the Pacific Ocean, offers a unique lifestyle with beautiful scenery and a great quality of life. Arroyo Grande, CA is known for its charming and walkable downtown with historic Victorian buildings, small boutiques, and golf. While you have all the amenities of the big city nearby, you won’t find many reasons to leave town with fun events and activities always on the horizon. The name Arroyo Grande can be translated to Muddy Creek or Big Ditch and for over a century it was just a ranch community and railroad stop until rapid development began in the 1970s. Is Arroyo Grande a good place to live? Definitely, and here’s why you’ll love living in Arroyo Grande, CA!

Arroyo Grande is located in San Luis Obispo 16 miles south of the city of San Luis Obispo in the 93420 and 93421 zip codes and area code 805. The city has a total area of 5.94 square miles and it’s just 2 miles east of the Pacific Ocean. Within the city limits is Lopez Lake, a reservoir formed by the Lopez Dam and a popular recreation destination.

Arroyo Grande is a safe community with crime rates 40% lower than the California average and a violent crime rate 65% below the national average.

Despite its small size, Arroyo Grande has had two famous residents: actors Lou Ferrigno and Zac Efron, the latter of whom grew up in the city.

The Arroyo Grande climate is Temperate-Mediterranean with 286 sunny days per year on average, well over the U.S. average! You’ll get no snow and just 20″ of rain per year on average. It’s hard to beat the weather while living in Arroyo Grande if you’re looking for year-round comfort with average January lows in the 40s and average July highs in the 70s. Only 6 days on average per year are very hot and over 90 degrees.

One of the benefits of living in Arroyo Grande is the city’s thriving economy with future job growth expected to outpace the U.S. average. Arroyo Grande’s economy is surprisingly diverse for its size and focuses on tourism, retail, agriculture, and tech. The average household income in Arroyo Grande is $74,600 with an average salary of $65,000.

Curious what you could be making after moving to Arroyo Grande? Here’s the average salary for common jobs in the city:

Many people living in Arroyo Grande choose to make the commute to the city for work. Here’s what your 16-mile commute from Arroyo Grande, CA to San Luis Obispo, CA looks like. You can get an idea of potential careers and what you can earn by searching online for jobs in Arroyo Grande ahead of your relocation.

Planning on renting while living in Arroyo Grande? The average rent in Arroyo Grande is $1,695 which is up almost 13% from a year ago according to RentJungle. That’s higher than the national average but still shows that renting can be more affordable than buying in the city.

One of the most desirable Arroyo Grande neighborhoods is Berry Gardens, a subdivision surrounding a park. This is one of the newer communities with single-family homes built in the early 2000s.

Vista Del mar is one of the most expensive neighborhoods in Arroyo Grande with many homes priced at $1 million or more. The 104-acre community features 38 custom and semi-custom homes with stunning coastal and city views. Homes in the community range from 2,500 to 4,500 square feet and they’re surrounded by 30 acres of undeveloped land.

You can get an idea of what you can buy in Arroyo Grande by searching for Arroyo Grande, CA homes for sale as you plan your relocation.

If you’re moving to Arroyo Grande, CA with kids or plan to start a family, the quality of the school district is probably a big concern. Arroyo Grande is served by the Lucia Mar Unified School District which has a mix of schools that are average to above-average. Ocean View Elementary School in Arroyo Grande is a top-rated school with a 9/10 GreatSchools rating and test scores far above the state average.

If you’re considering your higher education opportunities, you’ll find a couple of colleges nearby with the closest in San Luis Obispo. Colleges in the region include California Polytechnic State University San Luis Obispo and Cuesta College.

Fun Things to Do in Arroyo Grande, CA

Ready to learn about the best things to do in Arroyo Grande with kids and the whole family? The charming community of Arroyo Grande is best known for its fun and historic downtown with lots of shops and restaurants. The small city has convenient shopping like the Five Cities Center, Arroyo Town and Country Square Shopping Center, Vons, Trader Joe’s, and Walmart. You can also take the short 4.4-mile drive from Arroyo Grande, CA to Pismo Beach, CA, home to the iconic Pismo Beach Pier and Dinosaur Caves Park and a fun town in its own right!

One of the best things to do in Arroyo Grande for families? Sunny days spent at Rancho Grande Park, a large park with a walking trail, baseball fields, a basketball court, volleyball courts, and two playgrounds. It’s also dog-friendly!

Arroyo Grande’s Swinging Bridge is a one-of-a-kind attraction in California. Constructed in 1875, this swinging suspension bridge stretches 40 feet over Arroyo Grande Creek with a total length of 171 feet.

Looking for a casual place to enjoy seafood and steak with family and friends? The Quarterdeck serves up fun and tasty cocktails in an island-themed setting!

Have you settled on life in Arroyo Grande, CA? Get the dependable help you need as you prepare for moving to Arroyo Grande, California with the trusted movers at Mentors Moving & Storage. We’re here to help with tailored moving services, top-notch customer service, and honest pricing. Call us today to get a free Arroyo Grande moving estimate!