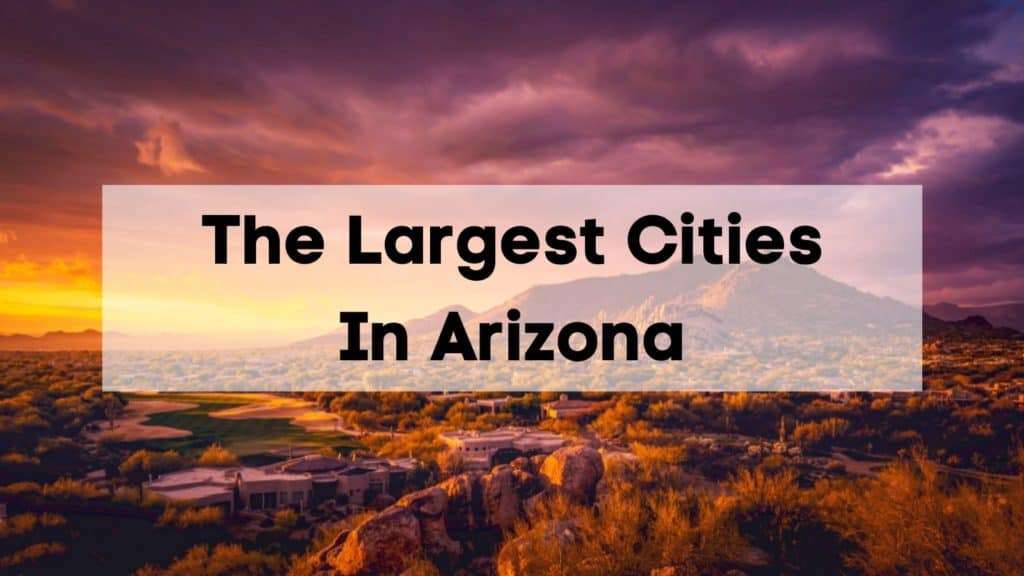 There is a lot to love about living in The Grand Canyon State. Arizona has endless mountain ranges, tall palm trees, rivers, lakes, and wide-open space, making it a dream location for outdoor lovers. If you’re searching for a fantastic place to live in Arizona, you’ll have a lot of great cities to choose from.  With 300 days of sunshine, a booming economy, and a reasonably low cost of living, Arizona is a perfect choice for families, retirees, and young professionals. The most difficult decision you’ll have is choosing where to live. Our list of the 10 major cities in Arizona can help you narrow down your picks, so you can find the best place to live in Arizona that fits you, your family, and your lifestyle. This data of largest cities in Arizona comes from the US Census.

Before breaking down the major cities in the state, let’s look at Arizona’s demographics. Arizona ranks 14th nationally in population and 28th in median household income. Here are some interesting facts about Arizona.

A post shared by Scottsdale Houses For Sale (@michelle_noma_real_estate)

Phoenix is the capital of Arizona and the largest city. It’s also the fifth-largest city in the United States. With year-round sun and warm temperatures, the Phoenix metropolitan area is called the Valley of the Sun. You’ll find high-end spa resorts and golf courses here, as well as lively nightclubs.

In 1867, Phoenix was first settled in the northeastern part of the Sonoran Desert. Near where the Salt and Gila rivers meet, Phoenix was an agricultural town, incorporated as a city in 1881. In 1889, it became the capital of Arizona Territory. A canal system led to a thriving farming community, producing cotton, cattle, and citrus.

Today, Phoenix is a manufacturing hub, especially for electronics, transportation equipment, aerospace technology, foodstuffs, and cosmetics. The metropolitan area is also home to high-tech. However, the economy in Phoenix mostly depends on tourism, especially in the winter months.

Tucson, the second-main city in Arizona, is home to the University of Arizona. It’s located 108 miles southeast of Phoenix and 60 miles north of the Mexican border. Founded as a military fort by the Spanish in 1775, the city became part of Mexico in 1821. The United States acquired the area that includes Tucson in 1853. It was incorporated in 1877 and is the oldest incorporated city in Arizona.

The University of Arizona is Tucson’s largest employer. Davis-Monthan Air Force Base, on the city’s southeastern edge, provides many jobs as well. Fort Huachuca, a US Army Intelligence Center, is located in nearby Sierra Vista, which ushered in many high-tech industries in Tucson. Raytheon Missiles and Defense, Texas Instruments, IBM, Intuit Inc., Honeywell Aerospace, and Sunquest Information Systems all have facilities in Tucson. As with Phoenix, tourism is a major industry in Tucson.

Mesa is part of the Phoenix metropolitan area and is located about 20 miles east of Phoenix. Mesa is the largest suburban city by population in the United States. Many centers of higher education are located there, including the Polytechnic campus of Arizona State University.

The original settlement in 1877 was called Fort Utah and the name changed several times before becoming Mesa City in 1878. The city was incorporated in 1883. A surge of military personnel to Mesa followed the acquisition of Falcon Field and Williams Field in the early 1940s.

Twenty-five minutes away from Mesa is Usery Mountain Regional Park, where hikers can explore more than 3,500 acres of pure natural wonder. Mesa is also a great place for bicycle enthusiasts with over 40 miles of bike lanes in the city, the desert, and the mountains. For more information about Mesa, click here.

Arizona’s fourth-biggest city is a suburb situated about 22 miles southeast of Phoenix. Chandler was settled as ranch land in 1891 by John Chandler. The town of Chandler was founded in 1912 and incorporated in 1920. Williams Air Force Base was built there in 1941, which led to a small surge in population. In the 1980s, Chandler experienced exponential growth due to the influx of major manufacturing plants for companies like Microchip, Motorola, and Intel. Today, Chandler is still ranked among the fastest-growing municipalities in the country.

Scottsdale lies 13 miles northeast of Phoenix and is part of the Phoenix metropolitan area. It was named after its founder, Winfield Scott, in 1894. The city was incorporated in 1951 with agriculture as the main industry. The Tonto National Forest borders Scottsdale to the north, the fifth-largest national forest in the United States.

Tourism is Scottsdale’s main industry, accounting for 39% of the city’s workforce. Along with New York City, Las Vegas, and Chicago, Scottsdale has the most AAA Five-Diamond hotels and resorts in the United States. Year-round warm weather and plenty of sunshine are major factors contributing to Scottsdale’s tourism appeal. Thousands of snowbirds and tourists flock to Scottsdale from as far away as Canada every winter. One of The Mayo Clinic’s three major campuses is located in Scottsdale, making it an appealing destination for medical care.

Gilbert is situated 22 miles southeast of Phoenix and is within the city’s metropolitan area. Settled as an agricultural community in 1902, Gilbert has become an economically diverse suburban center. Incorporated in 1920, it is the largest incorporated town in the United States.

Gilbert has garnered many recent accolades, including the 2nd Safest City and the 22nd Best Place to Live in the country, which accounts for its population growth. The K-12 school system in Gilbert is nationally ranked with an average graduation rate of 90%.

Another suburb of the Phoenix metropolitan area, Glendale sits approximately 9 miles northeast of Phoenix. This area was nothing but desert until the late 1800s when construction began on the 40-mile-long Arizona Canal. Completed in 1885, the canal brought much-needed water to the area. The Beet Sugar Factory was built there in 1906 and contributed to the growth of Glendale.

Glendale is a vibrant and welcoming metropolitan city today. Sahuaro Ranch Park is located there, producing figs and other fruit orchards, vineyards, and alfalfa. Glendale is the home of state-of-the-art entertainment facilities like State Farm Stadium, the home of the NFL’s Arizona Cardinals, and the 2008, 2015, and 2023 Super Bowls.

High-tech manufacturers like Conair and Honeywell Aerospace call Glendale home. You’ll also find Midwestern University there, the only veterinary school in the state of Arizona, and Luke Air Force Base, where new F-35 pilots train.

Tempe is an inner suburb, with Phoenix to its left, Scottsdale to the north, Chandler to the south, and Mesa to the east. The main campus of Arizona State University is in Tempe.

The establishment of Fort McDowell 25 miles northeast of present downtown Tempe in 1865 resulted in an influx of military service members. Hispanic workers were hired to grow food and animal feed to supply the fort. They set up camps in what is now known as Tempe, growing alfalfa, wheat, barley, oats, and cotton. The name Tempe was adopted in 1879.

Tempe has expanded over the years to become a center of education and commerce. Arizona State University is the largest employer. Insight Enterprises, DriveTime, LifeLock, and First Solar are headquartered in Tempe. Edward Jones Investments and State Farm Insurance have regional headquarters there. The city is also home to the Los Angeles Angels spring training complex.

Peoria is another major suburb of Phoenix, located about 13 miles southeast. It houses the spring training complex for the San Diego Padres and Seattle Mariners. Peoria was a small, agricultural community when it got its name in 1897, and the city wasn’t incorporated until 1954. In the early 50s, Luke Air Force Base and the mass production of air conditioning brought an increase in population.

Surprise is the second-fastest-expanding municipality in the Phoenix metropolitan area after Gilbert. Founded in 1938 by Flora Mae Statler and incorporated in 1960, Surprise is a haven for retirees. Tens of thousands moved here in the 1990s and early 2000s to Sun City Grand, an age-restricted resort-like community. The Kansas City Royals and the Texas Rangers come here for spring training every year.

Surprise has a small-town feel with big-city amenities. With community celebrations, art galleries, cultural experiences, and regional festivals, this multigenerational city has something for everyone.

The city enjoys majestic views of the White Tank Mountain range to the west and the Sonoran Desert and Lake Pleasant Regional Park to the north. A home for outdoor enthusiasts, Surprise boasts plenty of hiking, fishing, and camping within a 20-minute drive.

How many cities are there in Arizona?

There are 91 cities in Arizona.

What is the most populous city in Arizona?

Phoenix is the most populous city in Arizona.

How many people live in Arizona?

Which of the Largest Cities in Arizona is Right for You?

Now that you know a little bit about the major cities in Arizona, have you decided which one is the best fit for you? Even if you choose a city that isn’t on our list, you’ll find that Arizona has many great places to live. Whichever city you’re moving to in Arizona, our team of movers is there to help. Our professional crew at Mentors Movers knows all these areas very well, and we’re here to make your relocation process as easy as possible!

Give us a call today at 480-619-8240 to learn about our moving services, or simply complete our Request a Quote form above to get a free moving estimate!