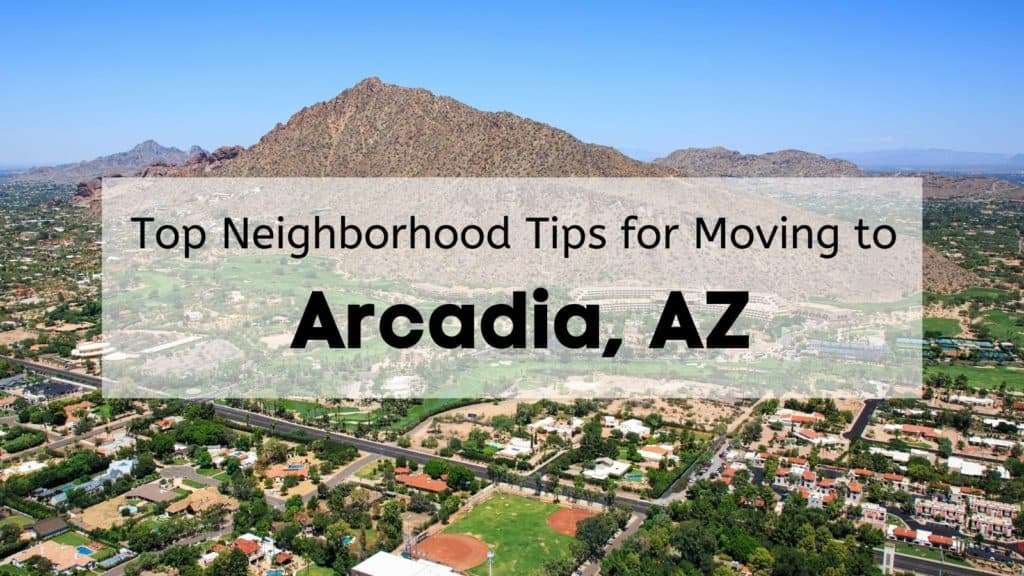 In history, Arcadia was home to the Greek gods and considered a place of pure, harmonious nature. Arcadia, Arizona lives up to the reputation as an upscale suburban neighborhood in Phoenix, located about 3 miles from Scottsdale and adjacent to the wealthy suburbs of Paradise Valley and Biltmore. Arcadia is known for having well-irrigated and mature landscaping on large lots, leftover from the citrus farmers that inhabited the area between 1919 and the mid-1950s. Many homes still have several orange, lemon, and grapefruit trees in the yard.

Arcadia is also known for its up-and-coming shopping and dining district, with independent grills, bars, and boutiques at Camelback Village Center. One of the most picturesque and popular neighborhoods, Arcadia is often named the best place to live in Phoenix because it replaces the dirt and rocks seen around the rest of Phoenix with an abundance of green, healthy plants. Arcadia District offers easy access to the walking, running, and cycling trails at Camelback Mountain summit and the Arizona Canal Trail. Many people living in Arcadia say the easy access to outdoor activities and getting to watch the sunset over Camelback Mountain plays a role in the high quality of life they experience.

After the turn of the century, wealthy landowners started constructing single-family homes on irrigable lands in the suburbs of Phoenix. To develop large areas of land, sizable real estate from several owners had to be assembled and surveyed with the intent to create subdivisions of homes for the upper class. This was difficult, and only one subdivision was successful at the time: the Arcadia Subdivision.

Developers promoted Arcadia as a neighborhood for wealthy families looking for a rural atmosphere with agricultural potential for cultivating citrus groves. Lot sizes ranged from 4 to 10 acres, and there were minimum cost restrictions for the construction of homes.

The city of Phoenix grew in the 1950s to reach Arcadia and today, most of Arcadia is in Phoenix, with the exception of the area east of 64th Street which is in Scottsdale. The Phoenician Resort was developed during the late 1980s on 60th Street with luxurious guest accommodations and a 27 hole golf course. Two more residential subdivisions were developed in the 1990s, Arcadia Estates on the southeast corner of Arcadia Drive and Lafayette Boulevard, and Royal Palms Estate on the previous golf course.

Arcadia has two natural boundaries, the Camelback Mountain along the northern border and the Arizona Canal along the southern border, which keep the area quiet and insulated from traffic. It also attracts many young families interested in moving to Arcadia.

Once living in Arcadia, many people commute 10 miles from Arcadia to downtown Phoenix for work, a commute that takes about 23 minutes by car. Driving is the preferred method of transportation in Phoenix, but public transportation can get you where you need to go if you don’t have a car.

The most affordable public transportation in Arcadia is the Valley Metro light-rail, which you can take from Arcadia to Phoenix or anywhere else around the city, for just $4 for an all-day pass. They operate two bus routes, 41 and 50.

The population of Arcadia is about 10,000 with a median age of 40. An affluent area, the median household income of Arcadia is $92,400. The community is highly educated, with 34% having earned a graduate degree and another 34% earning a bachelor’s degree. It’s truly a neighborhood with a strong sense of community. Everyone knows their neighbors and looks out for one on another.

Despite the Camelback Mountain looming in the background of Arcadia that might make you think the neighborhood would be positioned far on the outskirts of a desert town with tumbleweeds blowing by – Arcadia is actually a community where the under 30 crowd is found hanging out at the local pubs and breweries playing darts and Skeeball, and young families are walking or biking to the nearby parks, mini-malls, and AZ Ice Arcadia for an afternoon of ice skating.

The convenient location between two major cities gives people in Arcadia the best of both worlds – the vibrant art and culture of Phoenix’s downtown scene, including the Phoenix Art Museum or the self-guided art walk on First Friday, and the nightlife, yoga studios, coffee shops and bustling art scene of downtown Scottsdale – where the highest population of millennials can be found.

Eat, Do, and Shop in Arcadia

Living in Arcadia offers many dining options for those nights when you just don’t feel like making dinner, want to celebrate an anniversary or special occasion, or simply want to try something new. In fact, Arcadia is known for its restaurant scene. Two of the best restaurants in the neighborhood include The Stand and elements:

The Stand opened in 2013 by Arcadia resident, Eva Hofsted. Her grandmother and mother owned a restaurant in Paradise Valley her whole life, so the restaurant industry was in her blood! It may look like your typical fast-food joint, but The Stand features daily fresh ground beef, hand-cut french fries, and hand-spun shakes. If you visit, ask for the most popular item on the menu, the Grand Royale burger with grilled onions and jalapenos, bacon, cheese, and the Stand sauce. Wash it all down with a coffee milkshake that has ground-up espresso beans and Nitro brewed coffee!

The luxurious eatery at Sanctuary Camelback Mountain, elements offers award-winning farm-fresh American Cuisine with Asian accents. Visit every season for the seasonal menus incorporating local, organic produce, choose from the vegetarian and gluten-free options, or enjoy sustainable seafood and hormone-free meat. From its position on 53 acres of E McDonald Drive, you’ll enjoy extraordinary views of Paradise Valley and Camelback Mountain while you dine al fresco or in the dining room with floor-to-ceiling windows.

After lunch overlooking the mountain, head over to Camelback Mountain for an afternoon hike. If you climb one of the two difficult trails ascending 1,420 feet to the top of the mountain (resembling the hump of a camel’s back), you’ll be rewarded with 360-degree views of Phoenix and Paradise Valley.

If you’re not up for the physical challenge, you could visit David and Gladys Wright House on N. Rubicon Ave in Phoenix, the last residential masterpiece designed by the infamous Frank Lloyd Wright. It’s a breathtaking and innovative spiral-designed home designed to answer the question, How to Live in the Southwest?

If you’re experiencing one of the 300 days a year of Phoenix sunshine, you could spend the day at Arcadia Park, enjoying the open grassy area, picnic tables, volleyball courts, and playground. Since you’re there, you may as well also take a walk to the popular tourist destination of Arizona Falls, a dropping body of water that generates some of the electricity for Phoenix.

Arcadia is a shopping lover’s paradise. Everything you could possibly need or want can be purchased right in town, from clothing to jewelry, to bath and body products, farmer’s markets, and home products. urbAna has two locations in Arcadia and Scottsdale and offers a curated boutique with elegant home goods, luxury gifts, designer furnishings, and artisan decor items. For your healthy home-cooking needs, the Uptown Farmer’s Market is open semi-weekly for pickup at the North Phoneix Baptist Church with over 100 regional vendors selling fresh fruits and vegetables, baked goods, and grass-fed meats.

The median listing home price in Arcadia is $1.1 million, with homes staying on the market for an average of 42 days. The typical home in the neighborhood are single-family, historic post-war, one-story ranch houses with large lots, but there are some moderately priced options as well as rental opportunities. The Capri on Camelback Apartments in Arcadia are highly-desirable, luxury apartments with a view of Camelback Mountain from almost every window.

Walking down the streets of Arcadia is a colorful experience, a stark contrast to most of Phoenix’s desert environment. Most lawns are covered in thick, green lawns with professional landscaping and citrus trees just begging you to enjoy a piece of fruit on a hot summer afternoon. To find your piece of paradise, check out the available homes for sale in Arcadia.

In addition to the gorgeous, high-value homes, families move to Arcadia because of the exceptional public school district. Children living in Arcadia attend the Scottsdale Unified School District, including Hopi Elementary School, Arcadia High School, and The Hills School; or they go to parochial private schools like Saint Theresa Catholic School and Christ Lutheran School.

When you’re ready to move to Arcadia and experience the high quality of life that comes from living in Arcadia, call Mentors Moving & Storage at 480-619-8240 for a stress-free experience.