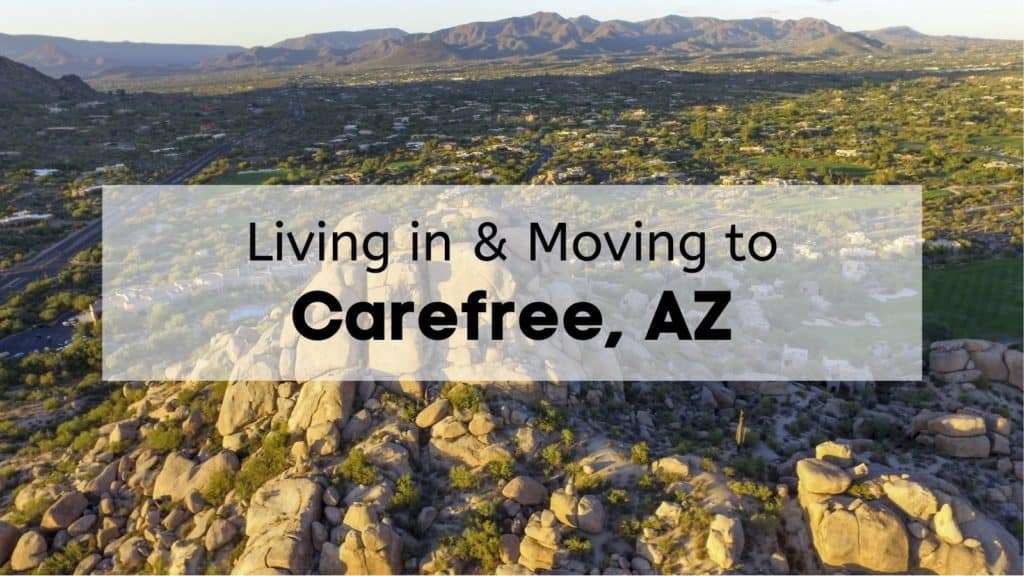 Carefree is an upscale, retirement community, one of many Phoenix suburbs in Maricopa County. Conceived as a planned community in 1955, the area began construction of homes only a few years later. Eventually, circa 1984, the community was incorporated to avoid annexation by her neighbor, Scottsdale. Since its construction, Carefree has been an affluent community, commonly drawing in actors and other famous folk who worked in or around Scottsdale, and generally retaining an older population as a result. Nowadays, little has changed about that reputation. Carefree is home to many notable residents, such as actor Dick van Dyke and artist Frederick J. Brown.

Thinking about moving to this community, but wondering if Carefree is a safe place to live? When you’re paying this much, it should come as no surprise that crime is nearly non-existent in Carefree, with a general crime rate 78% lower than the U.S. average according to Areavibes. Carefree’s police department is the Maricopa County Sheriff’s Office, which employs over three thousand people. Carefree is a very safe place to live!

Cost of Living in Carefree, AZ

It should be little surprise that Carefree can be pricey, but Arizona’s affordability helps offset some of the worst excesses, as shown with the cost of living here being 33% higher than most places in the United States, according to Payscale. The median home price in Carefree is $747,000 which is more than double the average Arizona home price of $225,500. If you choose to move to Carefree, you’ll find that you’ll be paying a little below average for groceries, transportation, and utilities. In terms of renting in Carefree, it is typically pricey, although certainly not San Francisco levels, at $1,613 per month for all units.

It can be difficult to understand what abstract cost of living percentages and trends mean, so take a look at everyday expenses you can expect to pay while living in Carefree, provided by Numbeo.

Carefree is small, and very nearly became a neighborhood of Scottsdale in the ‘80s. Despite the fact that it is incorporated as its own town, it might be pertinent to think of Carefree as a neighborhood regardless — which means a lack of distinctive communities. However, there’s still plenty to know about Carefree’s geography! Check out some of your neighborhood options below:

Carefree’s west is taken up by Cave Creek, where most of the shopping and amenities lie, due to Carefree being primarily residential. Southwards lie the Boulders, a famous resort that is well-known as a Carefree landmark, but actually is territory of the city of Scottsdale.

If you want to make yourself a part of any of this community, you should check out the latest listings for homes for sale in Carefree, AZ.

Arizona is a desert, as should be obvious, and that means that you don’t have to worry about snow during the winter, for the most part, or rain in the spring. You can expect lows of 43 degrees Fahrenheit during the winter months, and highs of 102 degrees Fahrenheit during the summer months. Carefree experiences far less than the average amount of rainfall when compared with the rest of the United States, with 13 inches per year as compared to 38 inches. Meanwhile, Carefree experiences essentially no snow. The best times to visit Carefree, in terms of comfort rating, are April and October.

Things to Do in Carefree, AZ

With such a high pedigree, it should be no surprise that Carefree is a place where great shopping, good eats, and good fun are not hard to find! Check out shopping centers nearby like  the Carefree Marketplace for all your shopping needs! You should also check out some of the best things to do in Carefree, AZ below:

Arizona is cowboy country, even if all the glitzy skyscrapers hide it nowadays, and Frontier Town is a living history exhibit that fully embraces that! With costumed actors, a properly-themed restaurant, and more, Frontier Town immerses you in one of America’s defining historical periods.

Designed in 1962, this golf course and club attract many for their unique undulating desert course and robust driving ranges. When it comes to golf, you will certainly not be starved for options in Carefree!

The town of Carefree does not operate a parks & rec department, but adjacent Cave Creek operates a variety of parks nearby which many Carefree residents enjoy. See all of the most interesting parks at the Cave Creek parks & recreation site.

Places to Eat in Carefree, AZ

Alongside its host of things to do, Carefree is also home to plenty of great eats! Check out some below:

Offering a variety of breakfasts, coffees, and other assorted morning grub, Black Mountain Cafe is a popular stop for Carefree residents before early hikes, before work, or any other circumstance in which you could possibly need a hearty breakfast.

Who doesn’t love a good steak? Nobody with a brain, that’s who, and Carefree locals have the brains to know Keeler’s is an excellent stop if you’re in the mood for sirloin. Not only serving steak, but excellent drinks and other American dishes, Keeler’s Neighborhood Steakhouse has you covered on all things meat!

Carefree residents will likely put their students in either the Cave Creek or Scottsdale Unified Districts, both of which are distinguished as among the best in the entire nation. Some highlights in terms of local schools include Horseshoe Trails Elementary School and Cactus Shadows High School. You can rest easy knowing your child will have access to excellent education during your stay in Carefree!

Students and others in Carefree will enjoy the libraries and are served by the Desert Foothills Library.

Those planning on making a living in Carefree should know that wages and cost of living have been going up, according to Payscale. The most popular positions of employment are Case Manager, Director of Digital Marketing, and Human Resources Manager. The average salary for a worker in Carefree is $41k a year, while the average hourly wage is $18.09, but keep in mind that due to Carefree’s unique situation, these may not be accurate representations of actual incomes.

If you’re planning on living in Carefree, nearby areas like Scottsdale will provide all the opportunities for success you could possibly need! Check out the latest listings for jobs in Carefree, AZ here.

Explore Carefree’s large variety of things to do, places to eat, and more with this map!

Carefree’s singular zip code is 85377, while the area code is 480. Carefree is around 27 miles from Scottsdale’s city center, and if you want to commute from Carefree to Scottsdale, it will take you over thirty minutes. Carefree’s time zone is Mountain Standard Time, and sits at an elevation of 2,402’.

Ready to take that last step and start your journey to making Carefree your new home? Give Mentor’s Moving a call at 480-619-8240! Our crew of highly-trained professional Carefree movers will ensure your move is a stress-free process at affordable rates! Call now or fill out our online form for a free quote!