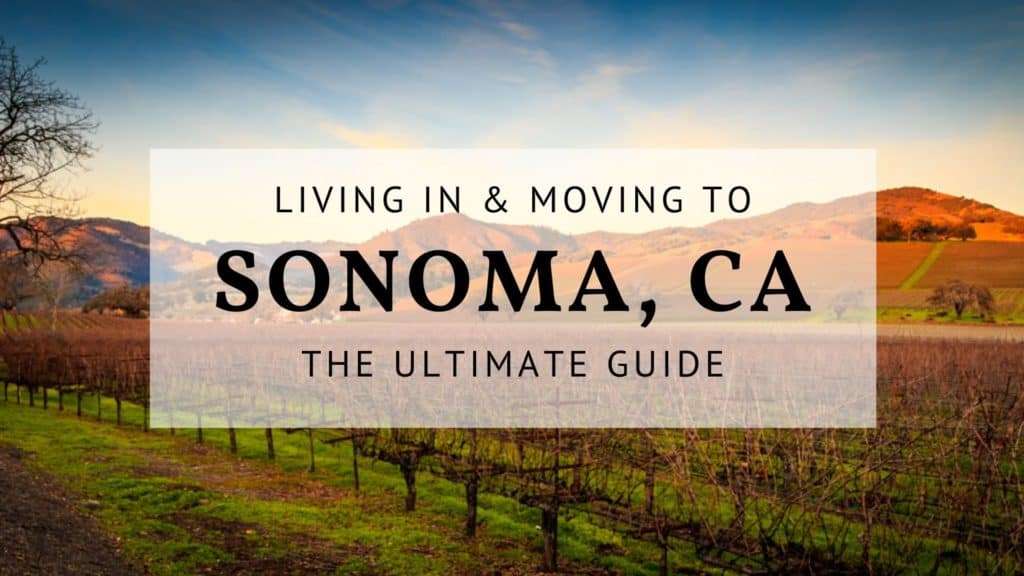 There are many benefits to living in Sonoma. From the historic buildings to the art galleries, many fall in love with this charming city. Located in the heart of Northern California and Sonoma County wine valley, it’s a great place to settle down and enjoy a slower lifestyle or retirement. With rolling green hills and grapevines for ample winemaking, you can enjoy the beautiful scenery all year long.

Sonoma is quite interesting. It has a Mexican colonial past, and it’s also well known for being the home of the Sonoma International Film Festival. It draws many tourists each year, but like any vacation town, it is a relaxing and peaceful city. Many people who choose to relocate here are older or middle-aged couples and those whose kids have grown and gone.

Sonoma’s population is 11,014 people. The median age in Sonoma is 50.5, and those moving to Sonoma are usually looking for a place to settle down and enjoy a slower lifestyle. Sonoma’s median household income is $76,964, and the average home prices in Sonoma clock in at $686,700. While these prices may seem high, for the area in California, it’s not too bad. In fact, right now is a great time to look at Sonoma , CA homes for sale and get in on the lower end pricing!

Those living in Sonoma are in Sonoma County and the Santa Rosa metro area. The Sonoma zip code is 95476. Racial and ethnic demographics for Sonoma are 80.8% white, 14.4% Latino, 2.57% Asian, and 2.12% two or more races. The good news is that Sonoma is a really safe city to live in. The crime is 33% less than California’s average, so you can rest assured that you won’t have to deal with a lot of crime.

Cost of Living in Sonoma, CA

California prices are known for being fairly high, and Sonoma is a town that is filled with a lot of tourists. Because of that, it can have slightly higher pricing than some of the surrounding areas. That being said, prices in Sonoma are much more affordable than Southern California. Prices will be similar to those in Santa Rosa, CA. According to Numbeo, the prices are about:

The homeownership in Sonoma is fairly high, probably because it’s a retirement and vacation town. 60.5% of people own their homes in Sonoma. However, for those who are looking to rent an apartment, you can expect to pay around $1,700-$2,000 for a one-bedroom apartment. As far as utilities, you could pay anywhere from $150-200 a month for utilities in Sonoma, which includes water, gas, heating and cooling, and electricity. This will vary depending on the size of your home.

Those looking for apartments may look in the City Center, which is right in downtown Sonoma. There are some new buildings and old buildings that have been redone to accommodate for apartments. In south Sonoma is Schellville and Fairville, which are nearby the Napa-Sonoma Marshes. Other Sonoma neighborhoods include Mission Highlands, Four Corners, Railroad Ave, and homes off of Moon Mountain Rd.

Many wonder what it’s like living in Sonoma, and the truth is that many people come for the weather. There is plenty of sunshine all year round, and the weather is fairly mild. The average temperature in Sonoma in the heat of summer (July) is a mere 89°F and in the winter (December) the average high is 58°F. As for the lows at night, the Sonoma climate ranges from 37°F in December and 52°F in July. Many come for the scenery, but everyone stays for the Sonoma climate!

Things to Do in Sonoma & Sonoma Restaurants

If you’re looking for fun things to do in Sonoma, you’ve come to the right spot. Not only is this city thriving in itself, but it’s also close to San Francisco. There are so many things you can do in San Francisco. Click on the link for directions if you need to travel from San Francisco to Sonoma which is 54 miles. But don’t worry, we also have some perfect Sonoma activities for you nearby. You can stay right in town and also try out these top things to do in Sonoma:

The biggest plaza in California, Sonoma Plaza is what Sonoma surrounds. This is rich in history, and it’s one of the top family things to do in Sonoma. If you want a relaxing day learning about the town, check this plaza out.

This raceway has events nearly every day of the year. With racing events and drifting contests, it’s a wild ride! No matter who you’re with, this is a fun thing to do in Sonoma and is perfect for adults and children alike.

Once you’ve fed your taste of adventure, it’s time to feed your grumbling belly too. Thankfully, restaurants in Sonoma are some of the best around. Grab a bite!

The Girl & the Fig

Looking for a bite to eat that will leave your tastebuds happy? This Sonoma restaurant has French country food and local wines, so you’ll get a taste of Sonoma all in one spot. With many 5-star reviews, don’t miss out on this one.

Steaks, seafood, wines, and a beer garden–what more could you ask for? This upscale eatery is a local favorite, and this Sonoma restaurant will never leave you feeling hungry! This is a perfect thing to do for couples in Sonoma.

Currently, Sonoma employs 5,243 people, but many people commute outside of Sonoma and go into the nearby cities, like Santa Rosa and San Francisco. The average commute is 23.7 minutes, and Sonoma jobs include management, office and admin support, and business and financial occupations. If you’re looking for current job openings in Sonoma, click the link for the many jobs in the Santa Rosa metro area.

Though Sonoma is often known as a retirement town, there are still many families that live in the area. The Sonoma school district is filled with amazing schools that are rated above average. There is Prestwood Elementary School, Woodland Star Charter School, Adele Harrison Middle School, and Sonoma Valley High Schools.

Once you’ve read this, you won’t have to ask, “Should I be living in Sonoma?” Instead, you’ll just know that the answer is a resounding yes! It’s the perfect spot to be with picturesque weather year round. When you’re ready to change your address and call Sonoma home, give Mentors Moving & Storage a call. We know Sonoma like the back of our hands, and we’re ready to help!