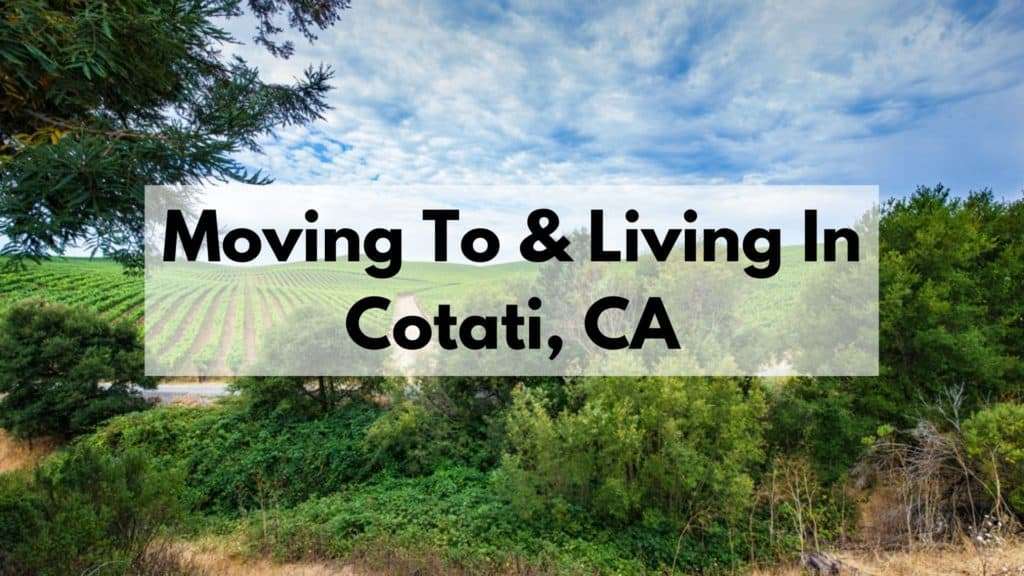 Moving to Cotati CA? | 🌲What’s Living in Cotati Like?

Just north of San Francisco is the beautiful city of Cotati. Pronounced ko-ta-tee, the city got its unique name from Kota’ti, which is a peaceful tribe of Coast Miwok Indians that resided in the valley for generations. The Indians prospered there for years thanks to its abundance of fish, berries, and grains and its temperate climate. Cotati is known for being one of the best places to live in Sonoma County due to their great schools, fun shops, and outdoor recreation. Many young adults love Cotati due to the city having an awesome nightlife with delicious restaurants that are easy to walk to. Cotati definitely has a more diverse atmosphere, which has allowed different talents to shine throughout the community. With caring neighbors and friendly faces wherever you go, residents quickly grow to love Cotati.

The population in Cotati is 7,470 people with a slight .295% growth from the previous year. Cotati’s racial make-up is 69.7% White, 11.9% Hispanic, 4.16% mixed races, 2.74% African American, and 11.9% other races. The median household salary in Cotati is $76,777. Cotati has had a 5.03% growth in the median income thanks to its increasingly prosperous economy. The median age in Cotati is 37.2, which has resulted in many young professionals and families residing there. Many of Lincoln’s residents feel pretty safe since Cotati’s crime rates are 29% lower than the national average.

Cotati isn’t the most affordable place to live when you’re comparing it to the rest of California and the national average. Living in Cotati is 51% more expensive than the national average and 2% more costly than the rest of California. However, this is mainly due to Cotati’s housing market. Cotati’s housing market is deemed to be very competitive with houses being sold 1% above their original listed price and off the market within 41 days. The average cost of a home in Cotati is $607,000, which is a 5.1% decline from last year. That makes it a perfect time to buy one of the many homes for sale in Cotati, CA before prices go up again. The homeownership rate in Cotati is 56.1%, so there are many people in Cotati looking to rent. If you’re interested in renting, the average rent in Cotati is $1989. The rent trends in Cotati have been steady this past year with a 1.5% decrease in prices for a one bedroom apartment and a .1% growth in prices for two bedroom apartments.

While Cotati’s housing cost can seem stressful, there are other common expenses that are more affordable. Transportation in Cotati is 20% cheaper compared to the rest of California. Utilities in Cotati are also fairly inexpensive, with it being the same as the national average and 1.2% cheaper than the rest of California. Some other expenses like healthcare and groceries are barely over the national average, meaning those essentials are fairly affordable.

Cotati has a ton of wonderful neighborhoods to pick from, so you’re bound to find one you like. The most popular neighborhoods in Cotati are Cotati Country, Cotati Hills, Bird Section, and Cotati Rancho Adobe. Cotati Country has smaller homes and properties, which has resulted in a lot of retirees living there. There is also a big park and lake by the neighborhood, making it a fun place for when the grandkids pay a visit. Cotati Country is right by the freeway, which is convenient when you need to travel to a nearby city. Cotati Hills is a smaller community with many older families residing there. The neighborhood is more rural than others and there is beautiful landscaping wherever you look. Residents are attracted to this area for its more farm-like and friendly atmosphere. Bird Section is the smallest neighborhood in Cotati with only 672 residents, with the majority being young families. The houses are fairly big and there are many shops and parks close by as well. Cotati Rancho Adobe is a big community with many kids in the area. There are a variety of sizes and styles of homes, making it easier to find the most perfect home. Residents love the area since its quiet, safe, and walkable to many parks and hiking trails.

Those relocating to Cotati can expect a Mediterranean climate, which makes the weather pleasant year-round in the city. The summers in Cotati are warm and arid with an average high temperature of 82°F and low temperature of 52°F. Meanwhile, Cotati’s winters are cold and wet with highs of 60°F and lows of 38°F. Cotati gets about 34 inches of rainfall per year, which is lower than the national average. There are many sunny days in Cotati, making it a desirable atmosphere for residents.

Things to Do in Cotati, CA

Looking for something fun to do in Cotati? We’ve got you covered! Check out the top-rated activities in Cotati down below:

Featuring local grown veggies, fruits, flowers, crafts, and other organic food, this is an enjoyable summer afternoon for families to look around and grab something good to buy! With live entertainment and activities to do with kids, this farmers market offers a full day of fun!

Looking for a fun date night? If so, Karah Estate Vineyards is the place to go! On a 144 acres of gorgeous rolling hills, this vineyard is a sight to see. With a tour throughout the vicinity, each guest will learn the delicate process of winemaking and be able to taste the wine made there!

Additional Things To Do Near Cotati

Wondering where you can get a delicious bite to eat? No problem, we’ve found the best Cotati restaurants for you to try below!

This local Cotati restaurant serves the best mexican food in the area. Mi Rancherito serves lunch and dinner with options of salads, nachos, burritos, soup, quesadillas, and more! With 99 cent taco nights and kids eating free on Tuesdays and Wednesdays, this is a great place to bring the whole family!

This cozy cafe offers its guests the most delicious breakfast and brunch menu, including dishes of scrambled eggs, waffles, oats, potatoes, and fruit. Redwood Cafe also has vegetarian and gluten free options, making the place an allergy-friendly environment! With hundreds of raving reviews online complimenting on their terrific food and service, this restaurant is a must-try!

The median household income in Cotati is $76,777. Cotati has 4,215 employees, which is a slight growth of .603% from last year. The most prevalent jobs are found within retail, health care, social assistance, and educational services. The highest paying jobs are in wholesale trade, agriculture, fishing, hunting, and mining. You can find Indeed jobs in Cotati here. The average commute time for residents in Cotati is 26.8 minutes. However, some people have to travel farther to bigger cities like Oakland and San Francisco for their job. If you’re planning to commute to San Francisco for your job, you can click here for directions from Cotati, CA to Santa Rosa, CA, which is 7.9 miles away.

One of the many reasons people choose to relocate to Cotati is for their amazing schools. The most popular schools in Cotati are Technology High School, Credo High School, Technology Middle School, and John Reed Elementary. All of these schools are highly complimented on their low teacher to student ratio, students’ progress, and diverse atmosphere. There are also many great options of private schools for kids in the Cotati area, including Bridge Haven School, Rancho Bodega School, Rainbow Bridge Montessori School, and Small Miracle Pre-School.

Ready to change your address and call Cotati your new home? If that is the case, call our top-rated moving company, Mentors Moving, to get you all settled in! With our experienced staff, you won’t have to worry about packing, loading, and transporting everything safely to your new property. Call us today for a free quote!