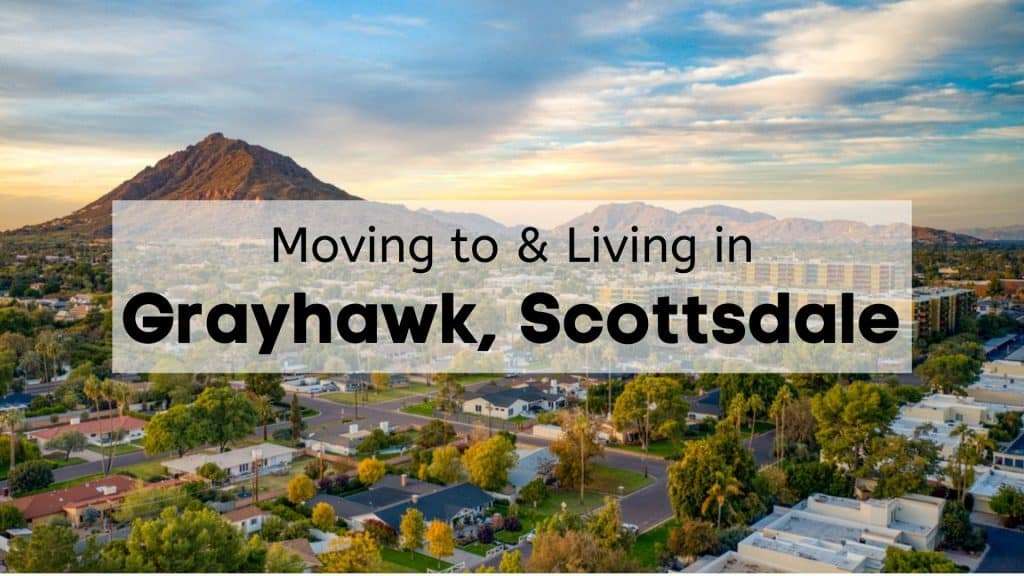 Grayhawk is a lovely neighborhood situated in the heart of Scottsdale, Arizona. The master-planned community of Grayhawk is a part of Maricopa County and consists of two resort-style yet interconnected areas packed with amazing community sports facilities, restaurants, and other amenities. Grawhawk has an architectural palette and incredible landscape that highlights the charming natural beauty of the Sonoran Desert. As a result, the Grayhawk community has a convenient location and close proximity to nature, open spaces, and outdoor activities such as jogging, hiking, biking, enjoying tennis courts, and taking a dip in the neighborhood pool. Grayhawk is best known for its two award-winning golf courses including the nationally acclaimed Grayhawk Golf Club. You’ll also find an array of different home styles, shopping centers, senior living campuses, a top-rated elementary school, and even a medical campus. Needless to say, the readers of AZ Business Magazine chose Grayhawk as Arizona’s #1 Master-Planned Community. Nonetheless, the peaceful neighborhood of Grayhawk provides residents with the convenience of an urban lifestyle while still having the serenity and beauty of living in a suburb.

Grayhawk sits on the land which was once inhabited by one of the four main prehistoric archeological cultures in the region known as Hokoham– the current American Southwest. Over 125 miles of irrigation canals were built here by this ancient civilization back in 800 AD to 1400 AD whereas much of the canals remain extant to this day.

In 1888, the initial settlement of the area encompassing Grayhawk was influenced by its pleasant climate, desert location, and beautiful scenery. Prior to this, the land was nothing more than a stagecoach stop between Phoenix and Camp McDowell. This area was founded by a former United States Army chaplain named Winfield Scott. Ranching, farming, and the water source was the major contributor to the growth and expansion of the Valley. In 1996, the community of Grayhawk was opened and the build-out was completed in 2004. Fast-forward to the 21st century, the official slogan of Scottsdale– including the neighborhood of Grayhawk– became “The West’s Most Western Town.”

The beautiful neighborhood of Grayhawk is located at the foot of the Mcdowell Mountains in the gorgeous Sonoran Desert. Situated between Phoenix and Paradise Valley, the area encompassing Grayhawk is bordered by Carefree to the north, Tempe to the south, and Fountain Hills and the Salt River Pima-Maricopa Indian Community to the east.

When it comes to getting around in Grayhawk, many people take to the trails, bikeways, and other amenities with non-motorized means of transportation. However, most errands in Grayhawk require an automobile of some sort which means that owning a car isn’t a bad idea– especially when commuting outside the neighborhood. The Scottsdale Healthcare Dr & 73rd St and Thompson Peak Pkwy & Scottsdale Healthcare are the two bus stops in Grayhawk. You’ll also have close access to Bus Route 72 which runs along Scottsdale Road as well as a free trolley service.

The vibrant and laid-back community in the neighborhood of Grayhawk has a population of 6,402 whereas the median age of residents is 49. With a median household income of $135,727, Grayhawk is upper-income for the most part. Grayhawk portrays an incredibly dynamic lifestyle whereas championship golf is the major attraction of residents and visitors of the neighborhood. Apart from golf, Grayhawk is home to an athletic community that often takes advantage of the neighborhood’s wonderful hiking areas, biking trails, and excellent parks within its 1,600 acres of land.

But the passion for sports and outdoor activities isn’t the only thing keeping residents up late on a Friday night– Grayhawk showcases a rising number of upscale restaurants and nightclubs, luxury shopping, and trendy galleries. This has made Grayhawk a popular vacation destination for the young and white-collar group. All things considered, living in Grayhawk proves to be an excellent choice for families to grow old as well as for the younger, more bustling generations.

Eat, Do, Shop in Grayhawk, Scottsdale

Grayhawk is packed with things to go, places to see, and restaurants to eat at. Within the boundaries of Grayhawk, there are two community associations, two golf courses, seven swimming pools, seven spas, six tennis courts, and over 30 miles of multi-use trails.

If you’re looking for a place to eat in Grayhawk, Isabella’s Kitchen is a great option for those seeking a tasty casual Italian restaurant that offers stunning views of Grayhawk’s golf course. You also are accompanied by an elegant and laid-back atmosphere while enjoying the restaurant’s rustic Italian fare & wine. Juan Jaime’s is another great choice. This excellent taco restaurant in Grayhawk features yummy street tacos and tequilas.

While living in Grayhawk, you’ll have close access to several fun places to go with your friends or family. The Grayhawk Golf Club is the most highly recognized amenity in Grayhawk. This club has two world-famous courses known as Raptor and the Talon– both over 7,000 yards. The Grayhawk Community Park & Pool is another must-go place in Grayhawk. This 13-acre park provides sand volleyball courts, baseball fields, soccer fields, tennis courts, and basketball courts.

When you’re in the mood for spending birthday cash, the 140,657 square-foot Hayden Peak Crossing shopping mall is the place to go. Here, you’ll find an array of grocery stores, boutiques, and remarkable restaurants! The Grayhawk Plaza is another great option for shopping. This remarkable shopping center in Grayhawk has over 35 stores and restaurants open to the public.

Explore even more places to go with this map of Grayhawk, Scottsdale below!

Grayhawk is contrived of two distinct “neighborhoods” or halves– The Retreat and The Park. Grayhawk has a total of 8 townhome and condominium neighborhoods (two in The Retreat, and six in The Park). The communities in The Retreat are known as the Raptor Retreat and the Talon Retreat. This neighborhood in Grayhawk is especially popular for older residents and offers numerous swimming pools and tennis courts. On the flip side, The Park is mainly family-oriented and offers plenty of playgrounds, greenbelts, grassy parks, and community ramadas. Regardless of where you end up, all areas in Grayhawk provide close access to a plethora of amenities for everyone to enjoy including the Grayhawk trail system.

Grawhawk has over 4,000 residential units consisting of townhomes, condos, villas, detached homes, and custom homes all featuring a versatile mix of style and size. More specifically, the homes in Grayhawk are said to be “affordable luxury” as well as diverse in their type, architecture, and characteristics. 71% are owner-occupied homes and there’s an average household size of 2.4 members in Grayhawk.

The median home price in Grayhawk comes in at $825,000 on Redfin whereas the houses stay on the market for an average of 22 days. 56.2% of homes sell above list price and there is a very competitive housing market in Grayhawk. If you’re looking into signing a lease, the average monthly apartment rent in Grayhawk is $2,358 on RentCafe.

Grayhawk is served by the Paradise Valley Unified School District and is home to Grayhawk Elementary School. Many students of other ages attend the public schools that are spread nearby throughout Scottsdale.

If living in Grayhawk is on your list of things to do, Mentors Moving can help give you a smooth and stress-free relocation! Reach out to us today at 480-619-8240 or fill out the “Request A Quote” form on our website so our professional Grayhawk moving services can get your move started!